Saint Mary's Square is a park and urban square across California Street from Old St. Mary's Cathedral in San Francisco's Chinatown, in the U.S. state of California. 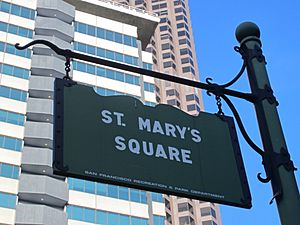 Designed in 1957 by Robert Royston the square is a rooftop park located on the top level of a parking garage in San Francisco’s Chinatown neighborhood. At the time, rooftop gardens were promoted in the city by real estate developers as a means to maximize build able areas, and were most often sited on two‐story, above‐ground parking structures. being one of the first below ground parking structures, the rooftop garden was put into the designs as an afterthought. the current existing park was redesigned from the historic park that occupied the space prior to the implementation of the underground parking.

Royston's design used a system of grids and multiple tones of concrete to draw attention from the geometry of the space, imposed on it by the virtue of being above a parking garage. by implementing low seat walls and the curved nature of the planting beds, he divided up the pedestrian spaces, generating a feeling of nature within the space. The park has access to the street via a wide concrete staircase on one end and an at-grade entrance at the other. An existing row of poplar trees was retained as backdrop for the park, and a sculpture of Sun Yat-Sen by local artist Benny Bufano provides a focal point for the space. The park also includes a playground and refreshment stand.

The park features several culturally significant implements to the surrounding area, being a central community hub for the Chinatown area.

The statue of Sun Yat-sen by Beniamino Bufano is a 14 foot statue made of red granite and stainless steel, stands in St. Mary's Square. It is inscribed: "Dr. Sun Yat Sen 1866-1925 Father of the Chinese Republic and First President Founder of the Kuo Min Tang Champion of Democracy Lover of mankind: Proponent of friendship and peace among the nations, based on equality, justice and goodwill". 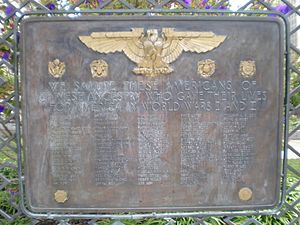 Other points of note

All content from Kiddle encyclopedia articles (including the article images and facts) can be freely used under Attribution-ShareAlike license, unless stated otherwise. Cite this article:
Saint Mary's Square Facts for Kids. Kiddle Encyclopedia.