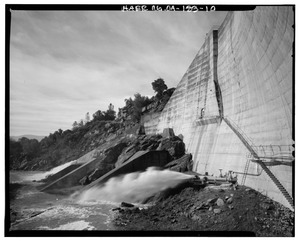 A picture of the Salinas Dam, taken facing North (Survey Number HAER CA-183). The intake pipes can be seen spilling excess water from the Santa Margarita Reservoir into the Salinas River.

The Salinas Dam is a dam built on the Salinas River in San Luis Obispo County, California. Designed by Raymond A. Hill, the gravity dam features an arched design with an open spillway. The War Department began construction on the dam in mid-1941, as World War II began to reach the Pacific. The original intent of the dam was to supply water to Camp San Luis Obispo, which the Army was considering expanding to meet military needs. However, the camp’s wells ultimately provided sufficient water to the camp, and the reservoir water was never required or used by the military. Today, the dam operations are leased by the city of San Luis Obispo, to supply water to the city and surrounding agricultural areas. The reservoir created by the dam is known as the Santa Margarita Lake, or Santa Margarita Reservoir.

The Salinas Dam is a gravity dam with an arched design. The dam is built at an angle to allow overflow in the event that the lake level surpasses a safe height or capacity. The dam is 135 feet high, and is built to withstand a maximum theoretical capacity of 26,000 acre-feet of water, and a maximum water level of 1300.74 feet. The intake system of the dam is composed of three separate intakes. Two of the three intakes are flexible 15-foot snorkels, and the third is a fixed type. The actual capacity of the dam due to natural settling of sediments is now 23,842.90 acre-feet.

The dam is almost entirely constructed of concrete, and was originally designed to include a steel spillway gate. However, the steel gate was installed at the Friant Dam near Fresno, instead, due to concerns that the dam would not be capable of holding the additional water. To date, the spillway remains as an open concrete ramp. This spillway is located at the north end of the dam and is 19 feet deep. With a gate installed to prevent the reservoir water from flowing over the spillway, it is estimated that the capacity of the reservoir could increase by 22,000 acre-feet, to a total of 46,000 acre-feet, provided the structure of the dam would be able to withstand the added pressure.

On May 21, 1941, the Army awarded a contract to two engineers to design and build the dam. The engineers forecasted that the dam would take a year to complete, but the Army would only allow six months for completion. Planning, surveying, and construction were accelerated, and the dam was completed within the allotted timeframe, in early January 1942.

The Salinas Dam project included not only the construction of the dam itself, but also the construction of a one-mile long tunnel through the Santa Lucia Mountain Range, and 9.2 additional miles of 24 inch reinforced concrete pipe to route the water. The one-mile tunnel, known as the Cuesta tunnel, was cement lined and approximately six feet wide by eight feet tall. The tunnel would allow the water to flow, by gravity, to the water treatment plant for the city of San Luis Obispo. 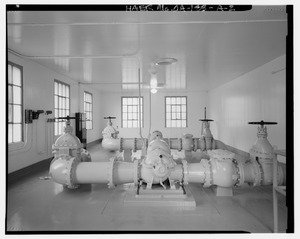 The watershed that feeds the Santa Margarita Reservoir is 112 square miles, with the dam collecting water from the Salinas River, as well as three of its tributaries: Alamo Creek, Salsipuedes Creek, and Toro Creek. In the event that the reservoir's surface water level meets or exceeds 1267 feet of elevation, water can flow by gravity to a booster station near the Santa Lucia mountain range. However, when the surface level of the reservoir falls below this amount, it must be pumped to the booster station. Either way, once the water reaches the mountains, it must be pumped for the additional mile to the entrance of the Cuesta tunnel, through the Cuesta tunnel, and another additional mile before gravity can again be used to transport the water the rest of the way to the water treatment plant.

San Luis Obispo now holds water rights up to 45,000 acre-feet from the reservoir; nearly the theoretical capacity of the dam with a flood gate installed.

The city of San Luis Obispo investigated the feasibility of expanding the dam as a part of its 2013 Salinas Reservoir Expansion Study. This study explored the option of installing a spillway gate on the dam, and transferring the dam ownership completely from the Army Corps of Engineers to an unspecified “local” entity. Seismic simulation tests were conducted as part of this study, and it was found that at the proposed increased water level, the dam likely not maintain structural integrity. It was also found that, even at the lower historic water capacity, the dam could possibly fail during a prolonged earthquake, but was within acceptable ranges.

Ultimately, the expansion did not come to fruition, and the ownership of the dam stayed in the hands of the Army Corps of Engineers.

All content from Kiddle encyclopedia articles (including the article images and facts) can be freely used under Attribution-ShareAlike license, unless stated otherwise. Cite this article:
Salinas Dam Facts for Kids. Kiddle Encyclopedia.