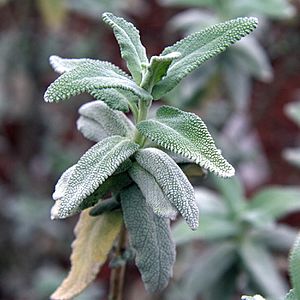 The plant's specific epithet, leucophylla, describes the light grayish leaves. The type specimen was collected near Santa Barbara, California by Scottish botanist David Douglas and named by Edward Lee Greene in 1892. The common names refer to the pale purple flowers (Purple sage) or to the grayish leaves (Gray sage).

Salvia leucophylla is an evergreen shrub that grows up to 1 to 1.5 m (3.3 to 4.9 ft) tall and wide. Leaves are a light green in the spring, turning grayish-white as they mature, with graceful branches that arch to the ground, sometimes rooting when they touch the ground. Flowers grow in tight whorls on 15 to 20 cm (5.9 to 7.9 in) long inflorescences, with a pinkish-purple flowering stem. The 2.5 cm (0.98 in) flowers are pinkish-purple, held in a purple-tinged gray calyx.

The plant is typically found on dry hillsides and in gravelly soils.

Salvia leucophylla is known to have allelopathic qualities. It is thought that monoterpenoids released from the plant may be responsible for inhibiting the growth of neighboring seedlings.

All content from Kiddle encyclopedia articles (including the article images and facts) can be freely used under Attribution-ShareAlike license, unless stated otherwise. Cite this article:
Salvia leucophylla Facts for Kids. Kiddle Encyclopedia.