Sam Hield Hamer (27 July 1869 – 6 February 1941) was an English writer and editor, mostly for children, but was also well-regarded as a travel writer.

Born in Islington, a son of John Hamer, a Justice of the Peace, and Sarah Sharp Hamer (née Heaton), a writer, the young Sam was educated at the City of London School. In 1886, at the time of the real general election in July, the school conducted a mock election, and the boys voted for a Liberal government to be led by Hamer. He left school that year to take up a position with the publishers Cassell and Company, where he rose to join the editorial staff and stayed with the firm until 1907, serving as editor of Little Folks from 1895 to 1907. He was a member of the National Liberal Club. He is credited with "discovering" Arthur Rackham as an illustrator. 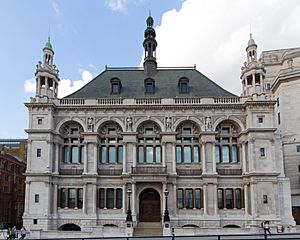 The home of the City of London School in Hamer's time

He also wrote under the name of Sam Browne.

Between 1897 and 1906 Hamer had a productive collaboration with the illustrator Harry B. Neilson.

Hamer's book The Dolomites (1910), also known as Wayfaring in the Dolomites, is about the mountain-climbing adventures of a family called Innerkofler.

Hamer was committed to saving British landscape and heritage sites, and was secretary of the National Trust for 23 years, from 1911 – 1934. He was responsible for raising the money needed (£35,000) for the Trust to buy the land surrounding Stonehenge. It was reported that, during the time that he was secretary, the number of National Trust properties increased from 40 to 250.

In 1913, a reviewer of his The Bran Pie commented that Hamer "probably understands the taste of children in literature as well as anyone now living." He corresponded with Beatrix Potter in the 1920s.

All content from Kiddle encyclopedia articles (including the article images and facts) can be freely used under Attribution-ShareAlike license, unless stated otherwise. Cite this article:
Sam Hield Hamer Facts for Kids. Kiddle Encyclopedia.