Sam and the Firefly facts for kids 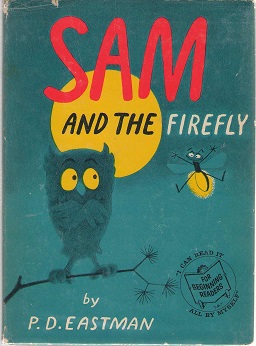 Sam and the Firefly is a children's book by P. D. Eastman. It was written and illustrated in 1958.

An owl named Sam awakens one night and looks for a playmate, but since it is the middle of the night, all the other animals are asleep. Sam then comes across a series of flying lights, one of which hits Sam in the head, which is Gus, a firefly. Gus shows Sam the trick he can do, which is he can make glowing lines in midair using his light. Sam is amazed and decides to have fun by having Gus follow him directly as he flies. Sam flies in the shape of several words; Gus finds this fun and decides to do more on his own. However, he has mischief on his mind.

First, he causes several cars to crash at an intersection by displaying "Go left", "Go right", "Go this way", and "Go that way" above. Sam wants to talk to him about this behavior, that it is dangerous and bad; however, Gus abandons Sam as he thinks Sam does not know how to have fun. Gus then continues to cause mischief; he causes several airplanes to get crossed up by displaying "Go up", "Go down", "Go this way", and "Go that way", he causes a crowd to occur into a movie theater by displaying "Come in! Free Show" above it, and he discourages the hot dog maker's customers and the hot dog man by changing a sign of a hot dog stand from "Hot Dogs" to "Cold Hot Dogs". This action causes the customers to see what Gus has done. They tell Gus (after seeing the word "Cold Hot Dogs" made by Gus) that they want their hot dogs hot and not cold. After the customers angrily say "Goodbye" to Gus, they ask him to leave them alone so they can have their hot dogs hot. Then, the hot dog man is mad. He shows up with a net and a jar. The hot dog man says he is going to catch the firefly and take him away. That way, the firefly is not going to play another trick on him again (when he is gone for good). Then he immediately catches Gus in a net, traps him a jar, and puts it into his pickup truck. Sam sees this and is determined to save him.

Gus regrets disobeying Sam's warnings about having too much fun. The aforementioned pickup truck stalls on a railroad crossing with a train coming. Sam then breaks the jar containing Gus, which lets him out. Now free, Gus displays the word "STOP" several times in large letters. The locomotive's engineer sees Gus' messages and the truck on the tracks. The engineer applies the brake and stops the train just in time. The hot dog maker and the engineer and brakeman all cheer for Gus, and Gus and Sam fly off into the night. At dawn, Sam and Gus must go back to their homes to sleep, since they are both nocturnal. However, Gus continues to visit Sam's tree home every night to play.

All content from Kiddle encyclopedia articles (including the article images and facts) can be freely used under Attribution-ShareAlike license, unless stated otherwise. Cite this article:
Sam and the Firefly Facts for Kids. Kiddle Encyclopedia.