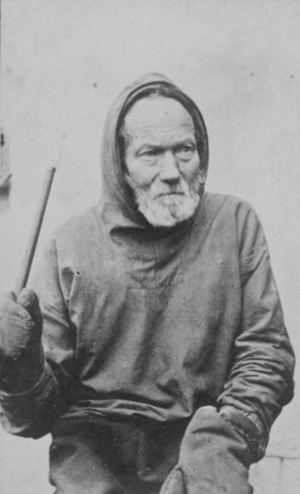 Samuel Petrus Kleinschmidt (27 February 1814–9 February 1886) was a German/Danish missionary linguist born in Greenland known for having written extensively about the Greenlandic language and having invented the orthography used for writing this language from 1851 to 1973. He also translated parts of the Bible into Greenlandic.

He was born in the rectory of Lichtenau in southern Greenland (today, Alluitsoq) to a couple of Moravian missionaries, Johann Konrad Kleinschmidt (1768 – 1832) from Oberdorla in Thuringia, Germany and Christina Petersen (1780-1853) from Trudsø, now a part of Struer, Denmark. As a youth he went to school in Kleinwelke, Saxony in Germany and subsequently for an apprenticeship to a pharmacy in Zeist, Holland studying during that period Latin, Greek, and Hebrew, as well as Dutch, French, and English, all the while retaining his childhood languages, Danish, German, and Greenlandic. In 1837 he went to Christiansfeld in Denmark working there for a couple of years as a teacher. Subsequently he returned to Greenland in 1841. After two years he held his first sermon in Greenlandic, speaking it fluently and plainly rather than using old worn out idioms of the previous ministers. From 1846 to 1848 he worked as a teacher in Lichtenfels (present-day: Akunnat), subsequently moving to Neu-Herrnhut (Old Nuuk). 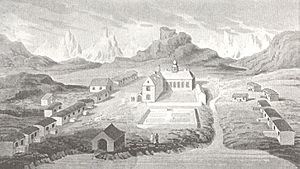 He already finished his grammar of Greenlandic in 1845 and sent it to printing at the University of Berlin but it was not be published until 1851. It was exceptional because it did not use the traditional scheme of the Latin grammar to describe its subject, but rather devised a new scheme more suited for the Greenlandic language. This grammar was also the first work to employ the orthography which became the standard in writing Greenlandic until the reform of 1973. In 1859 he left the Moravian church to join the Church of Denmark. Most of his time in Greenland he served as a teacher rather than as a priest. He also translated the better part of the Bible into Greenlandic. He died in 1886 at 72 years of age in Neu-Herrnhut (present-day Noorliit, a part of Nuuk), having spent 54 of them in Greenland.

All content from Kiddle encyclopedia articles (including the article images and facts) can be freely used under Attribution-ShareAlike license, unless stated otherwise. Cite this article:
Samuel Kleinschmidt Facts for Kids. Kiddle Encyclopedia.