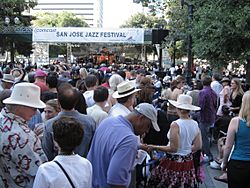 The San José Jazz Summer Fest (originally known as the San Jose Jazz Festival) is an annual music festival organized by non-profit San Jose Jazz and held in downtown San Jose, California. The festival was established in 1990. The festival began charging fees in 2006. The main stage is in Plaza de César Chávez with others nearby.

The inaugural edition in 1990 was a one-day event with one stage.

All content from Kiddle encyclopedia articles (including the article images and facts) can be freely used under Attribution-ShareAlike license, unless stated otherwise. Cite this article:
San Jose Jazz Festival Facts for Kids. Kiddle Encyclopedia.