The Schomburgk's deer (Rucervus schomburgki) was a member of the family Cervidae. Native to central Thailand, Schomburgk's deer was described by Edward Blyth in 1863 and named after Sir Robert H. Schomburgk, who was the British consul in Bangkok from 1857 to 1864. It is thought to have gone extinct by 1938, but there is speculation that the deer might still exist. 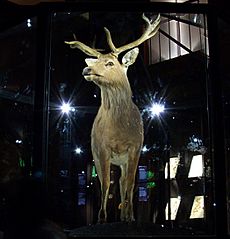 The only mounted specimen, in Paris 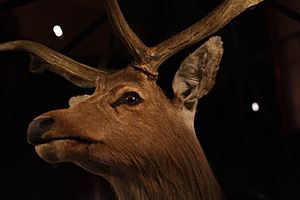 Close-up of the head

This deer was a graceful species similar in appearance to the barasingha. The pelt was a dark brown with lighter underparts. The underside of the tail was white. Males possessed basket-like antlers, upon which all the main tines branched. This caused the deer to have up to 33 points on their antlers and the outer edge of the rack to be up to 35 inches (90 cm) long. Females had no antlers.

Schomburgk's deer inhabited swampy plains with long grass, cane, and shrubs in central Thailand, particularly in the Chao Phraya River valley near Bangkok. This deer avoided dense vegetation. They lived in herds that consisted of a single adult male, a few females, and their young. However, during the flooding that occurred during the rainy season, the herds were forced together upon higher pieces of land which could turn into islands. This made them easy targets for hunters.

Commercial production of rice for export began in the late-19th century in Thailand, leading to the loss of nearly all grassland and swamp areas on which this deer depended. Intensive hunting pressure at the turn of the century restricted the species further until it became extinct.

The wild population of Schomburgk's deer is thought to have died out because of overhunting in 1932, with the last captive individual being killed in 1938. The species was listed as extinct in the 2006 IUCN Red List of Threatened Species. However, some scientists consider this species to be still extant. Only one mounted specimen is known to be in existence, which currently resides in Paris's Muséum national d'Histoire naturelle after living in the zoo there until 1868.

In 1991, antlers were discovered in a Chinese medicine shop in Laos. Laurent Chazée, an agronomist with the United Nations, later identified the antlers from a photograph he took as coming from Schomburgk's deer.

All content from Kiddle encyclopedia articles (including the article images and facts) can be freely used under Attribution-ShareAlike license, unless stated otherwise. Cite this article:
Schomburgk's deer Facts for Kids. Kiddle Encyclopedia.