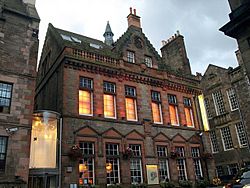 The Scotch Whisky Experience is a whisky visitor attraction located on Castlehill in the Old Town of Edinburgh, immediately adjacent to the esplanade of Edinburgh Castle. The centre offers tours and whisky tutoring sessions, alongside a shop, corporate spaces and Amber Restaurant & Whisky Bar.

Opened in 1988, the Scotch Whisky Experience is located in the former premises of the Castlehill School. Although the school was mixed, boys and girls were kept apart by separate sets of stairways – a design feature which the building still maintains. Due to falling school numbers, the school closed in 1951, fulfilling various roles afterwards, including a catering school, an urban studies centre and a general store..

All content from Kiddle encyclopedia articles (including the article images and facts) can be freely used under Attribution-ShareAlike license, unless stated otherwise. Cite this article:
Scotch Whisky Experience Facts for Kids. Kiddle Encyclopedia.