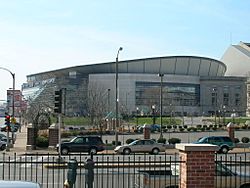 Scottrade Center, when it was called the Savvis Center

Scottrade Center is a sports arena in St. Louis, Missouri. The arena opened on October 8, 1994, and is the current home to the St. Louis Blues of the National Hockey League (NHL). The arena was also home to Saint Louis University's men's basketball team from 1991 to 2008.

The arena was originally known as Kiel Center from 1994 to 2000 and Savvis Center from Aug 2000 to 2006. Scottrade acquired naming rights for the arena in September 2006.

The Scottrade Center has held many WWE events as well including: Badd Blood: In Your House, Survivor Series in 1998, the special live tribute episode of WWF Raw is War that aired after the night of Owen Hart's death, No Mercy in 2001, Judgment Day in 2007, Elimination Chamber in 2010, Royal Rumble in 2012 and Extreme Rules in 2013.

All content from Kiddle encyclopedia articles (including the article images and facts) can be freely used under Attribution-ShareAlike license, unless stated otherwise. Cite this article:
Scottrade Center Facts for Kids. Kiddle Encyclopedia.