Scottsdale Fashion Square is an upscale, super-regional luxury shopping mall located in the downtown area of Scottsdale, Arizona. It is the largest shopping mall in Arizona with approximately 2 million square feet (190,000 m2) of retail space, and is among the top 30 largest malls in the country. It has consistently been one of the most profitable malls in the United States, being ranked in 2016 as the second highest sales per square foot mall in the country, and as of 2016, it was ranked in the top 25 most visited malls in the country by Travel + Leisure magazine. The mall is located on the northwest corner of Scottsdale Road and Camelback Road in Scottsdale, Arizona, and has been owned by Westcor, a subsidiary of Macerich, since 2002.

During the 1930s and 1940s, the land which would become the Scottsdale Fashion Square was too far from the established Scottsdale and Phoenix business areas to be considered valuable. A Ryan-Evans drug store was the only retail establishment on the site. During the 1940s the 40-acre site was purchased by Harry Lenart. In the 1950s he began to plan for a small shopping center. In 1959, the center opened consisting of four stores in addition to the existing drug store: a grocery store, barber shop, liquor store, and camera store. In 1960 a steakhouse, built by Joe Hunt, Sr. was added.

Scottsdale Fashion Square was originally built as a 3-story open-air structure in 1961 The structure was designed by Edward L. Varney Associates. It was anchored by two local Phoenix stores, department store Goldwater's and supermarket AJ Bayless. At the time, the primary competitor was the Los Arcos Mall, a fully enclosed mall built in 1969, also located in Scottsdale. Its early financial success led to an expansion of the west-side of the mall in 1974, which nearly doubled the square-footage of the mall. This expansion also added an additional department store, Diamond's, to the northern section of the mall.

In 1977, a competing mall, the fully enclosed Camelview Plaza, was built just west of Scottsdale Fashion Square, on the other side of North 70th Street. Camelview Plaza boasted Los Angeles department store Bullock's and Sakowitz. The shopping center also included a Harkins Camelview Theatre on an outparcel.

For several years, the two malls competed for shoppers and tenants. However, in 1982 after Westcor's purchase of the mall, the owners agreed to connect the malls by building a two-story retail bridge across North 70th Street, replacing the shuttle service that ran between the two malls. In the process, the street separating the two malls was sunk below grade-level, widened to four lanes, and renamed North Goldwater Boulevard. The two malls were largely gutted and completely renovated. Dillard's took over the former AJ Bayless and Diamond's spaces to create a new department store, while Goldwater's was expanded to 235,000 square feet (21,800 m2). A ground-level food court, anchored by a 7-screen Harkins Theatres cinema, was also added. The redevelopment was completed in 1991, closely followed by the addition of Neiman Marcus (in the former Sakowitz) 1992. 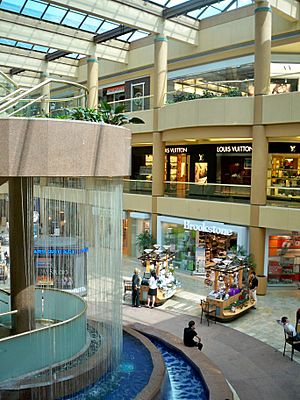 Waterfall in Palm Court, since replaced by an elevator

Goldwater's became J. W. Robinson's in 1989, only to be converted into Robinsons-May in 1993. Bullock's closed its doors at Camelview Plaza in 1996, and remained vacant for several years. That same year, Westcor purchased Camelview Plaza and renamed the entire 1,800,000-square-foot (170,000 m2) shopping plaza, Scottsdale Fashion Square. The new ownership brought major changes to the mall, the largest being the addition of a new wing anchored by Arizona's first Nordstrom store and featuring many upscale retailers. At that time, Dillard's took over the former Bullock's store and expanded it to 365,000 square feet (33,900 m2), making the Scottsdale store the largest in the company's fleet. This expansion increased the mall's square footage to 2,000,000 sq ft (190,000 m2) and made it the 13th largest enclosed shopping mall in the country.

Sears briefly occupied the former Dillard's store, only to be replaced by Macy's in 2002. 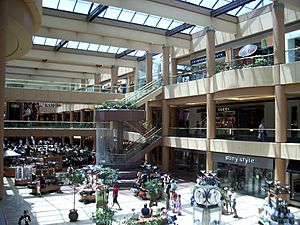 The merger between Federated Department Stores and May Department Stores brought the closure Robinsons-May in June 2006, leading the mall to demolish the former department store and build another new wing anchored by Barneys New York. The new wing, which also featured an H&M store, opened in 2009. That same year, the first Microsoft Store opened elsewhere in the mall.

Another expansion was added in 2015: a two-level building with Dick's Sporting Goods on the lower level and a new 14-screen Harkins Theatres cinema on the top level. In early 2016, Barneys New York announced it would close its Scottsdale Fashion Square store. In late 2016 the mall's owner, Macerich, announced plans of a new renovation, in excess of $100 million, which will include high-end residential units, a hotel, a new luxury entrance, hospitality areas and office space. Construction began in 2017, with the renovation completed in Fall 2018.

About a year after the Harkins had moved, a local theater opened in its place. Desert Stages Theater, a community play house for both old and young audiences, has now been an addition of Fashion Square for three years (after their ten-year lease in a lot across the street, they moved right into the mall behind the Jamba Juice).

In 2020, the mall was vandalized and looted after protesters violated curfew during the George Floyd protests. The police made twelve arrests including YouTube star Jake Paul, who claimed that he did not take part in the looting and was only recording it. Paul was charged with criminal trespass and unlawful assembly on June 4 for entering the mall illegally with the rioters. The first court date began on July 8. On August 5, 2020, the charges were dismissed without prejudice, with the Scottsdale Police Department saying it was "in the best interest of the community" and that a federal criminal investigation would be completed instead.

All content from Kiddle encyclopedia articles (including the article images and facts) can be freely used under Attribution-ShareAlike license, unless stated otherwise. Cite this article:
Scottsdale Fashion Square Facts for Kids. Kiddle Encyclopedia.