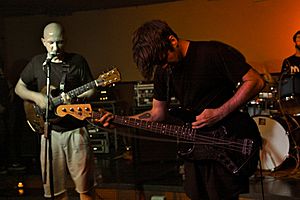 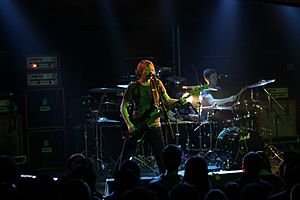 Circle Takes the Square, whose style borders on grindcore, gained considerable acclaim with the 2004 album As the Roots Undo.

Screamo is a musical genre which came from both emo and hardcore punk in the mid 1990s. This genre usually consists of minor chord progressions on guitar with both dissonance and reverb, the time signatures used are usually not in 4/4 instead bands and artists use less used time signatures to create a more tense feel, This genre has both a mellow and chaotic feel to it. The vocals are usually high-pitched screams and lyrics are often poetic or political. An example of some Screamo bands include Saetia, Orchid, Circle Takes the Square, Envy, pageninetynine, and Thursday.

All content from Kiddle encyclopedia articles (including the article images and facts) can be freely used under Attribution-ShareAlike license, unless stated otherwise. Cite this article:
Screamo Facts for Kids. Kiddle Encyclopedia.