Seal of Alabama facts for kids 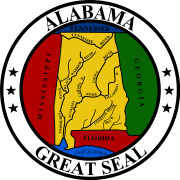 The Seal of Alabama

The Great Seal of the State of Alabama is the state seal of the U.S. state of Alabama. It was designed in 1817 by William Wyatt Bibb, the governor of the "Alabama Territory" and the subsequent first governor of the state. When Alabama became a state in 1819, the state legislature got the design as the official state seal. The seal prominently has a map showing one of the state's most valuable resources—its major rivers. Bibb's design served as the official seal until 1868, when it was replaced by a controversial design having on it an eagle holding in its beak a banner that read "Here We Rest." The legislature and Governor Frank M. Dixon restored Bibb's original design in 1939, and it has remained unchanged since.

All content from Kiddle encyclopedia articles (including the article images and facts) can be freely used under Attribution-ShareAlike license, unless stated otherwise. Cite this article:
Seal of Alabama Facts for Kids. Kiddle Encyclopedia.