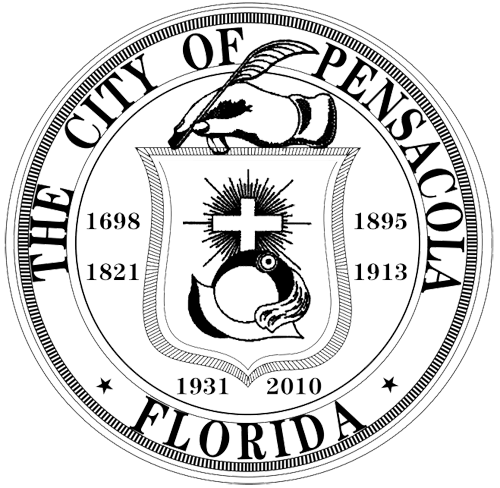 The Seal of the City of Pensacola is used to represent the Pensacola municipal government and for various official purposes. The current seal has been in use since 1870 and was officially adopted by ordinance in 1902, with slight modifications since.

At the center of the seal is a shield (escutcheon) charged with a Christian cross and conquistador's helmet, a modified version of the cross and crown that represents the religious mission of Don Tristán de Luna y Arellano. Above the escutcheon is a hand (symbolizing faith, sincerity and justice) holding a quill pen (symbolizing learned employment and the liberal arts). Five dates printed on the seal represent years when city governments were established or altered.

The wording of the municipal code prescribes the seal as follows:

For many years the first date listed on the seal was 1696, until local historians W. D. Skinner and Norm Simmons questioned the date, noting that 1698 was the year when Andrés de Arriola established a Spanish colony on Pensacola Bay.

In 1997, attorney Kevin Beck urged the city to remove the cross from the seal, citing constitutional concerns, and threatened to take legal action on behalf of an anonymous client. "My position would be the presence of the cross on an official city seal is tantamount to the endorsement of Christianity."

All content from Kiddle encyclopedia articles (including the article images and facts) can be freely used under Attribution-ShareAlike license, unless stated otherwise. Cite this article:
Seal of Pensacola, Florida Facts for Kids. Kiddle Encyclopedia.