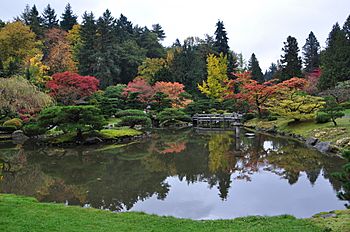 Beginning in 1937, plans were made to include a Japanese garden in the Arboretum, and after 20 years of fundraising the project began. Experts Kiyoshi Inoshita and Juki Iida were appointed as designers and completed their plans in 1959. Juki Iida selected William Yorozu as the prime contractor for plants, Richard Yamasaki for stone setting, and Kei Ishimitsu for garden structures. Careful construction began and was completed the next year, 1960.

Construction and design of the garden included bringing over 500 granite boulders from the Cascade mountains, ranging in size from 1,000 pounds to 11 tons. Wrapped in bamboo matting, the boulders traveled to Madison Valley and were arranged to complement a variety of culturally appropriate azaleas, rhododendrons, camellias, mosses and ferns. The garden featured a 'Shoseian' teahouse donated by the city of Tokyo in 1959. This original tea house was burned by vandals on April 9, 1973 and reconstructed by Yasunori "Fred" Sugita in 1980 and 1981. It took eight years of fundraising by the Arboretum Foundation until the teahouse was ready to be rebuilt.

The garden has undertaken several other infrastructure improvements, including a new gatehouse and community meeting room. The Gatehouse project was completed in 2009. The new structure includes a bronze gate designed by local Seattle sculptor Gerard Tsutakawa.

The garden was awarded the Japanese Foreign Minister’s Commendation for their contributions to promotion of mutual understanding between Japan and the United States on December 1, 2020.

The Seattle Japanese Garden hosts several cultural celebrations throughout the year, including:

All content from Kiddle encyclopedia articles (including the article images and facts) can be freely used under Attribution-ShareAlike license, unless stated otherwise. Cite this article:
Seattle Japanese Garden Facts for Kids. Kiddle Encyclopedia.