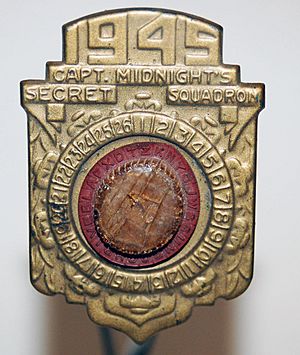 A secret decoder ring (or secret decoder) is a device which allows one to decode a simple substitution cipher - or to encrypt a message by working in the opposite direction.

As inexpensive toys, they have been often used as promotional items by retailers, radio and television programs from the 1930s through to the current day. Decoders, whether badges or rings, are an entertaining way for children to tap into a common fascination with encryption, ciphers, and secret codes, and are used to send hidden messages back and forth to one another.

Ovaltine and other companies that marketed early decoders to children often included "secret messages" on their radio shows aimed at children. These could be decoded for a preview of the next episode of the show.

All content from Kiddle encyclopedia articles (including the article images and facts) can be freely used under Attribution-ShareAlike license, unless stated otherwise. Cite this article:
Secret decoder ring Facts for Kids. Kiddle Encyclopedia.