Kids Encyclopedia Facts
For other uses, see Captain Midnight (disambiguation).
For the Heinlein character, see The Cat Who Walks Through Walls. For the Disney Channel television series, see The Famous Jett Jackson.

Sponsored by the Skelly Oil Company, the Captain Midnight radio program was the creation of radio scripters Wilfred G. Moore and Robert M. Burtt, who had previously scored a success for Skelly with their boy pilot adventure serial The Air Adventures of Jimmie Allen.

Developed at the Blackett, Sample and Hummert advertising agency in Chicago, Captain Midnight began as a syndicated show on October 17, 1938, airing through the spring of 1940 on a few Midwest stations, including Chicago's WGN. In 1940, Ovaltine, a product of The Wander Company, took over sponsorship. With Pierre Andre as announcer, the series was then heard nationally on the Mutual Radio Network where it remained until 1942. It moved to the Merchandise Mart and the NBC Blue Network in September 1942. When the U.S. Government broke up the NBC Red and Blue Networks, Ovaltine moved the series back to Mutual, beginning September 1945, where it remained until December 1949.

The show was known for the imaginative use of exciting technological advancements to create narrative thrills, inspiring young audiences to dream of future advances.

The title character, originally Captain Jim "Red" Albright, was a World War I U.S. Army pilot. His Captain Midnight code name was given by a general who sent him on a high-risk mission from which he returned at the stroke of 12. When the show began in 1938, Albright was a private aviator who helped people, but his situation changed in 1940. When the show was taken over by Ovaltine, the origin story explained how Albright was recruited to head the Secret Squadron, an aviation-oriented paramilitary organization fighting sabotage and espionage during the period prior to the United States' entry into World War II. The Secret Squadron acted both within and outside the United States.

When the United States was attacked at Pearl Harbor, which curiously was foreshadowed in the program, the show shifted the Secret Squadron's duties to fight the more unconventional aspects of the war. Besides the stock villain, Ivan Shark, the war years introduced Axis villains Baron von Karp, Admiral Himakito and von Schrecker. The Secret Squadron wartime activities were usually outside the continental United States, with adventures in Europe, South America, the Pacific, and continental Asia. War-related subject matter included the theft of an experimental Flying Wing aircraft, radar coupled antiaircraft guns, jet aircraft and other weapons.

After the war, some of the newer villains used war surplus equipment to carry out their activities. Secret Squadron activities shifted to contending with criminals as well as spies. The action continued to operate internationally, with adventures in South America and Africa as well as within the United States.

The show was extremely popular, with an audience in the millions. Just under half the listeners were adult, and it was a favorite of World War II United States Army Air Force crews when they were stationed in the U.S. Radio premiums offered by the series (usually marked with Midnight's personal symbol of a winged clock with the hands pointing to midnight) included decoders. These Code-O-Graphs were used by listeners to decipher encrypted messages previewing the next day's episode, usually broadcast once a week. Other premiums included rings, telescopes, and World War II items. (The broadcast messages were encrypted with relatively trivial monoalphabetic substitution ciphers with word division.)

The scripts depicted women who were treated as equals, not just characters waiting to be rescued. Both Joyce Ryan of the Secret Squadron and Fury Shark, daughter of villain Ivan Shark, pulled their own weight in the adventures. Joyce went on commando raids and became involved in aerial dogfights during World War II. 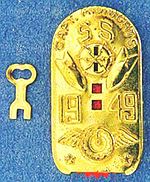 Popular actor-stunt man Dave O'Brien had the title role in the Columbia Pictures 15-episode serial Captain Midnight (1942). The serial used some of the characters from the radio show, but differed significantly from the radio program. Missing were the Secret Squadron and the Squadron equipment. The Captain Midnight character was presented as a masked secret identity for Captain Albright. The serial was later aired (one chapter per week) on select TV stations in the fall of 1953 and early 1954, under the title Captain Midnight's Adventure Theatre. (The TV show began a bit later, on September 4, 1954, on a weekly basis on CBS.

The Captain Midnight TV series, produced by Screen Gems and starring Richard Webb, began September 9, 1954, on CBS, continuing for 39 episodes until January 21, 1956. Each episode was thirty minutes. (The first season ran 26 episodes from September 9, 1954, through February 26, 1955; the second season ran 13 episodes from October 29, 1955, through January 21, 1956). The sponsors were Ovaltine and Kix Cereal/General Mills.

In the television program, Captain Midnight (now a veteran of the Korean War) heads the Secret Squadron as a private organization, in contrast to the radio show. As with the Fawcett comic, the only other character of the radio show held over was Ichabod (Ikky) Mudd (played by Sid Melton), who was used for comic relief. Another regular character was Dr. Aristotle "Tut" Jones, Midnight's resident scientist, played by character actor Olan Soule. (Soule was the only actor to perform in both the radio program and the television program. In the radio program, he played Agent Kelly, SS-11.)

The aircraft featured in the series is the Douglas D-558-2 Skyrocket, named the Silver Dart, and was based on using both models and occasionally stock footage. The series filmed at the Ray Corrigan Ranch in Simi Valley, California. Unlike other TV action heroes, Captain Midnight never ventured into space, but rather was confined to Earth's atmosphere and orbit. Viewers could send away for a special decoder device and membership kit by including the inner wax seal from a jar of Ovaltine to "Capt. Midnight, Box P, Chicago 77, Illinois".

When the TV series went into syndication in 1958 via Telescreen Advertising, Ovaltine was no longer the sponsor. However, The Wander Company owned the rights to the character's name "Captain Midnight," forcing a title change by Screen Gems from Captain Midnight to Jet Jackson, Flying Commando, and all references in the episodes to Captain Midnight were redubbed "Jet Jackson." The series (as "Jet Jackson") was syndicated well into the early 1960s.

A newspaper comic strip, based closely on the radio program, debuted in 1942. The strip, bylined by "Jonwan" (Erwin L. Hess) was drawn in a style similar to that of Milton Caniff. The major characters of the radio show were retained, including Joyce Ryan, Chuck Ramsay, Ichabod Mudd and Major Barry Steele. The strip was released by the Chicago Sun Syndicate on June 29, 1942, and ran until the late 1940s. France Herron wrote the strip from 1942–1944.

The strip had some differences from the radio show and did not reprise the radio adventures. In the strip, Captain Midnight was referred to as "an unofficial fighter for freedom," which is at variance from the radio show, where the Secret Squadron was set up by a high governmental official ("Mr. Jones"), which the hero was recruited to head (unless, of course, "unofficial" meant, in the modern pop-culture sense, "subject to official disavowal if caught or killed on a politically sensitive mission"). Even with the variants, it was far closer to the radio show than any of the other spinoffs.

Fawcett published 67 issues of Captain Midnight Comics from Sept. 1942 to Sept 1948. Otto Binder was one of the writers on the comic book. The Fawcett character bore little resemblance to the radio character, and only the character Ichabod Mudd appeared regularly in the comic as the sidekick Sgt. Twilight.

Captain Midnight in the comic wore a skintight scarlet suit and used an array of gizmos like Doctor Mid-Nite which released clouds of blinding darkness, the infra-red "Doom-Beam Torch" which he used to burn his emblem into walls and unlucky villains, and a "Gliderchute" (similar to the flying Wingsuit) attached to the sides of his costume.

In his Captain Albright secret identity he was a genius-level inventor like Edison. He had a secret laboratory in the desert.

In 2012, Dark Horse Comics reintroduced the character, with a three-part story written by Joshua Williamson with art by Victor Ibañez and Pere Pérez. In June 2013, Captain Midnight #1 was released by the same publisher as an ongoing series.

In 1942 Whitman Publishing released Joyce of the Secret Squadron as part of the Authorized Editions series.

In 2000, McFarland released Radio's Captain Midnight: The Wartime Biography. The contents were derived from the Ovaltine-sponsored radio programs, overing the adventures through the close of World War II.

In 2010, Moonstone Books published a collection of new Captain Midnight short stories entitled Captain Midnight Chronicles. The book's stories reflect an amalgamated version of the Captain Midnight character and his supporting cast, and incorporate elements from the various media incarnations of the character, including the radio and television series, the Columbia movie serial and Fawcett comic book.

All content from Kiddle encyclopedia articles (including the article images and facts) can be freely used under Attribution-ShareAlike license, unless stated otherwise. Cite this article:
Captain Midnight Facts for Kids. Kiddle Encyclopedia.