The Sedgeford Historical and Archaeological Research Project (SHARP) is a long-term, multidisciplinary research project based in north-west Norfolk, United Kingdom. It is involved in the investigation of the local history and archaeology, with a strong emphasis on community involvement, practical training and education. The Project attracts volunteer excavators and students from all over the world. 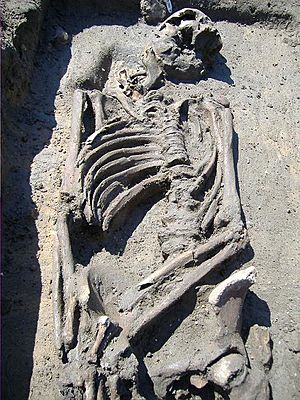 An Anglo-Saxon skeleton excavated by SHARP

In 1957-58, Peter Jewell of the University of Cambridge excavated small trenches on the "Boneyard Field" and recorded a number of human burials and features.

In 1995, a conversation in the Europa Hotel in Sorrento between Neil Faulkner, then still a research student at University College London, and the landowners of the Sedgeford Hall Estate, Bernard and Susan Campbell, about his desire to direct an excavation, leading to the Campbells mentioning the archaeological richness of Boneyard.

SHARP was founded in 1996, initially focussing on the same Anglo-Saxon cemetery located to the south of the modern village of Sedgeford. Since that time, SHARP has investigated many other sites within the parish using a variety of methods: open-area excavation, test-pitting, geophysical survey, fieldwalking and metal detection, and the analysis of historical documents.

SHARP is made up of a team of directors, supervisors, trustees and committee members, along with a number of excavators and other volunteers during June-August. From 1997, the project has served as a model for Faulkner's "Democratic Archaeology" in rejecting traditional hierarchies, though is still broadly a community archaeology project.

The Project is one of the largest training digs in the UK, providing practical training in excavation and recording as well as running taught courses on aspects of the site: e.g. skeletal remains, artefacts, and Anglo-Saxon history. However, unlike most training sites, it is independent from any one academic institution and operates as a registered UK charity (number 1064553).

Apart from the Anglo-Saxon cemetery, fieldwork has also been conducted on Iron Age, Roman, medieval and modern remains in the Sedgeford parish, with the West Hall area receiving considerable attention as the historic centre of the modern village. Excavations, including test pits in a number of gardens, have taken place throughout the village. Work has also been done on the First World War Aerodrome.

Sites and finds of interest 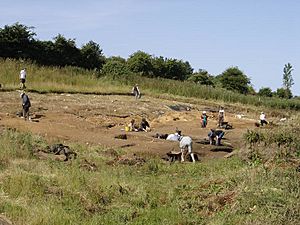 One of the "Boneyard" open-area excavations

Over the years a number of particularly unusual discoveries have been made:

All content from Kiddle encyclopedia articles (including the article images and facts) can be freely used under Attribution-ShareAlike license, unless stated otherwise. Cite this article:
Sedgeford Historical and Archaeological Research Project Facts for Kids. Kiddle Encyclopedia.