See You Around, Sam! facts for kids 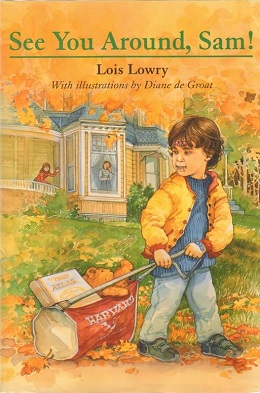 See You Around, Sam (1996) is a children's novel by Lois Lowry. It is part of a series of books that Lowry wrote about Anastasia and her younger brother, Sam.

Anastasia Krupnik's little brother, Sam, wants fangs more than anything in the world. But there is one big problem. Sam's mother, Mrs. Krupnik, has fangphobia and forbids Sam even to touch his plastic vampire fangs in the house. How can she not see how cool fangs really are? Sure, they make it hard to eat hot dogs, but they make him look disgusting - and Sam loves to took disgusting. So Sam decides to run away to Alaska, where "fanged" walruses lie around in a pile and sharp teeth are generally accepted. He packs his mittens and bear in his father's Harvard University gym bag and sets off, but just down the block, Lowell Watson, the mailman, reminds him he will need food for Alaska. Neighbor Gertrude Stein's homemade chocolate chip cookies are just the thing. And how can he leave without saying goodbye to the Sheehans' baby, Kelly? He needs a glass of water, and there really isn't any reason to hurry to Alaska...

In See You Around, Sam!, Lois Lowry continues to give Anastasia's brother a voice of his own. As the quirky characters on his block welcome him into their homes one by one, he discovers the true meaning of community.

Lowry's reason for writing the novel

Lowry's own website states: "Sam was born when Anastasia was ten, and for a long time he existed only in the books about her. But kids liked him. Maybe he reminded them of their own little brothers. So at the request of young readers, I gave Sam his own series."

All content from Kiddle encyclopedia articles (including the article images and facts) can be freely used under Attribution-ShareAlike license, unless stated otherwise. Cite this article:
See You Around, Sam! Facts for Kids. Kiddle Encyclopedia.