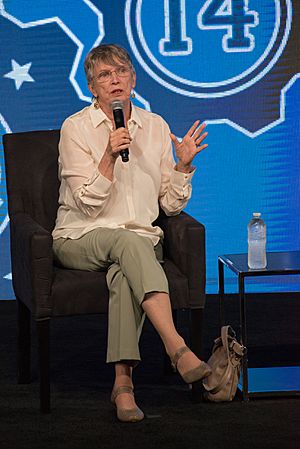 Lois Lowry is an American author who was born in Honolulu, Hawaii on March 20, 1937. Her father wasn’t present in her childhood, so she liked to write about strong father figures in her books. She became interested in reading when she was very young. She had a lot of trouble with math.

Lowry began her career writing about children who face major challenges. Most had to do with family. Her first novel was A Summer to Die. It established her as an important author of young adult fiction. Her books cover many different topics, including the future, war, and humor. They are for young adults who want to read about serious issues. Lowry is a very successful author. She won the 1990 and 1994 Newbery Medal for Number the Stars and The Giver. Some of her stories are based on her childhood, like her character Anastasia Krupnik in the book Anastasia Krupnik. Some of her most famous books are Number the Stars, The Giver, Gathering Blue, Bless This Mouse, and Messenger.

All content from Kiddle encyclopedia articles (including the article images and facts) can be freely used under Attribution-ShareAlike license, unless stated otherwise. Cite this article:
Lois Lowry Facts for Kids. Kiddle Encyclopedia.