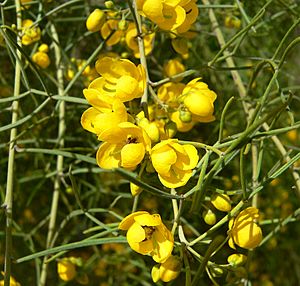 Senna artemisioides, the wormwood senna, is a species of flowering plant in the pea family Fabaceae. It is endemic to Australia, where it is found in all mainland states and territories. Other common names include silver senna, silver cassia or feathery cassia - although "cassia" generally refers to the largest-growing Cassiinae. Some of its distinct subspecies also have common names of their own.

This is an evergreen shrub that grows up to 3 m (9.8 ft) in height. It has grey-green pinnate leaves with between 1 and 8 pairs of leaflets. It produces an abundance of yellow “pea” flowers in winter and spring which are about 1.5 cm in diameter, followed by 2 to 7 cm long flat green pods which age to dark brown.

The species adapts to a wide range of climatic conditions, but is susceptible to frost, especially when young. It prefers dry, well-drained sites with full sun. As an ornamental plant, it is propagated readily from seed, which should first be briefly immersed in boiling water.

The species was first described in 1825 by Charles Gaudichaud-Beaupré based on work by Augustin Pyramus de Candolle and placed in Cassia, but nowadays it has been moved to Senna. However, for a long time this plant was erroneously known as Cassia eremophila which is a true species of Cassia called desert cassia, described by Julius Rudolph Theodor Vogel.

(Senna quadrifolia Burm. is a synonym of Chamaecrista absus)

Some hybridogenic subspecies have also been named:

(Cassia coriacea Benth. is a synonym of Chamaecrista coriacea)

In addition, there are apparently at least 2 undescribed taxa:

All content from Kiddle encyclopedia articles (including the article images and facts) can be freely used under Attribution-ShareAlike license, unless stated otherwise. Cite this article:
Senna artemisioides Facts for Kids. Kiddle Encyclopedia.