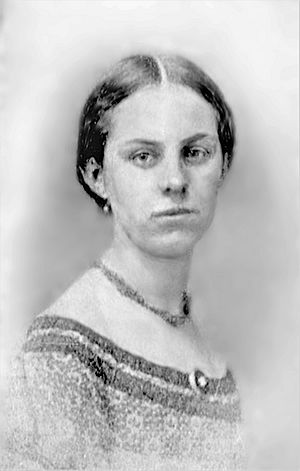 Seraph Young Ford (November 6, 1846 – June 22, 1938) was the first American woman to cast a ballot under a law that made women citizens' voting rights equal to men's. She voted in Salt Lake City's municipal election on February 14, 1870, becoming the first woman in Utah Territory and the United States to vote under a women's equal suffrage law.

Seraph Cedenia Young was born on November 6, 1846 to Cedenia Clark and Brigham Hamilton Young in Winter Quarters, Nebraska. The Young family migrated to the Great Basin the next year along with other Mormon refugees, arriving in October 1847 and settling in Salt Lake City. Young, grandniece of Brigham Young, was the oldest of nine children and eventually became a teacher at the model school at the University of Deseret. She was twenty-three years old and teaching at the University of Deseret at the time of her historic vote.

Utah's territorial legislature unanimously passed a law extending voting rights to women citizens in February 1870. Acting territorial governor Stephen A. Mann signed the bill into law on February 12, 1870 and Salt Lake City's municipal election was held just two days later. No historical records survive that record Young's feelings about the issue of woman suffrage, but newspapers reported that she was the first woman to cast her vote on February 14, 1870, which made her the first American woman to vote under a law that gave women the same voting rights as men. Young's simple action made history. (Although Wyoming Territory had extended voting rights to women citizens before Utah Territory did, Utah held two elections – the municipal election on February 14 and a territory-wide election on August 1 – before Wyoming women first cast ballots on September 6.) Young did not go on to become a leader in the women's rights movement, but Utah women remembered her even decades later as the first to vote.

In 1872, Young married Seth L. Ford in Salt Lake City. He was a printer from Buffalo, New York and a Union Army veteran who eventually became an invalid due to injuries sustained during the war. The couple had three children, two of whom survived to adulthood, and lived most of their married life in New York and Maryland. Young cared for Ford until his death in 1910, and was buried next to him in Arlington National Cemetery after her death in 1938. Her headstone read “Serath” instead of the correct spelling of her first name until it was fixed in 2020.

David Koch's mural depicting Seraph Young's historic vote is in the House of Representatives chamber of the Utah State Capitol.

Seraph Young's historic vote was cast at Council Hall, which in 1870 served as the city hall for Salt Lake City and housed the territory's Legislative Assembly. The building was moved in 1961 to the grounds of the Utah State Capitol. In 2019, the Utah Capitol Preservation Board approved a women's history sculpture for the lawn in front of Council Hall to honor Seraph Young's historic first vote and commemorate Utah's role in the struggle for women's suffrage. The sculpture, designed by Utah artists Kelsey Harrison and Jason Manning, will be installed in the summer of 2020. On February 14, 2020, the 150th anniversary of Seraph Young's vote, public history non-profit Better Days 2020 led a remembrance walk to Council Hall, where Salt Lake City mayor Erin Mendenhall spoke about the importance of Utah women's leadership in the suffrage movement and encouraged Utah citizens to register and vote.

All content from Kiddle encyclopedia articles (including the article images and facts) can be freely used under Attribution-ShareAlike license, unless stated otherwise. Cite this article:
Seraph Young Ford Facts for Kids. Kiddle Encyclopedia.