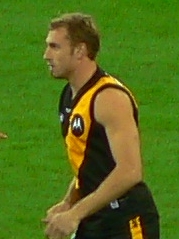 Shane Tuck (24 December 1981 – 20 July 2020) was a professional Australian rules footballer. He played for the Richmond Football Club in the Australian Football League (AFL) between 2004 to 2013. Before, he played with Hawthorn Football Club from 2000 to 2001. Tuck was born in Victoria, Australia.

All content from Kiddle encyclopedia articles (including the article images and facts) can be freely used under Attribution-ShareAlike license, unless stated otherwise. Cite this article:
Shane Tuck Facts for Kids. Kiddle Encyclopedia.