Shepton is an area within Plano, Texas, United States that used to be a distinct community. 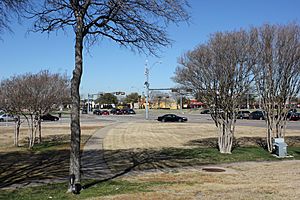 Intersection near what was Shepton

Shepton was founded about 1890, when Joseph W. Shepard opened a general store ten miles southwest of McKinney, with the town deriving its name from Shepard's. From 1894 to 1903, Shepton had a post office, but most residents migrated over the years to nearby Plano, also in southwestern Collin County, with the growing Plano absorbing the area of the former community by the 1980s.

Shepton High School is named after the town of Shepton.

All content from Kiddle encyclopedia articles (including the article images and facts) can be freely used under Attribution-ShareAlike license, unless stated otherwise. Cite this article:
Shepton, Plano, Texas Facts for Kids. Kiddle Encyclopedia.