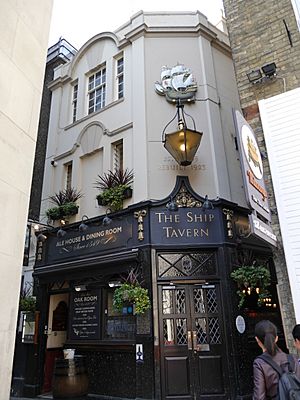 The Ship Tavern is an inn at the western corner of Lincoln's Inn Fields, at the corner of Gate Street and the Little Turnstile in London. Established in 1549, at the height of the English Reformation, when Catholicism became illegal, it was used to shelter Catholic priests and hold secret Catholic services. It was originally in Whetstone Park, which was notorious for its gambling houses. Richard Penderell, who aided Charles II's escape, visited it, as did John Bagford (a shoemaker and antiquarian), the Chevalier d'Eon (a woman who lived as a man) and John Smeaton (the builder of the Eddystone Lighthouse). It was consecrated as Masonic lodge 234 in 1736 by the Grand Master, the Earl of Antrim, and rebuilt in 1923.

All content from Kiddle encyclopedia articles (including the article images and facts) can be freely used under Attribution-ShareAlike license, unless stated otherwise. Cite this article:
Ship Tavern, Holborn Facts for Kids. Kiddle Encyclopedia.