SilverHawks is an American animated television series developed by Rankin/Bass Productions and distributed by Lorimar-Telepictures in 1986. The animation was provided by Japanese studio Pacific Animation Corporation. In total, 65 episodes were made. It was created as a space-based equivalent of their previous series, ThunderCats.

As was the case with ThunderCats, there was also a SilverHawks comic book series published by Marvel Comics under the imprint Star Comics.

A bionic policeman called Commander Stargazer recruited the SilverHawks, heroes who are "partly metal, partly real", to fight the evil Mon*Star, an escaped alien mob boss who transforms into an enormous armor-plated creature with the help of Limbo's Moonstar. Joining Mon*Star in his villainy is an intergalactic mob: the snakelike Yes-Man, the blade-armed Buzz-Saw, the "bull"-headed Mumbo-Jumbo, a weather controller called Windhammer, a shapeshifter known as Mo-Lec-U-Lar, a robotic card shark called Poker-Face, the weapons-heavy Hardware, and "the musical madness of" Melodia who uses a "keytar" that fires musical notes.

Quicksilver (formerly Jonathan Quick) leads the SilverHawks, with his metal bird companion Tally-Hawk at his side. Twins Emily and Will Hart became Steelheart and Steelwill, the SilverHawks's technician and strongman respectively. Country-singing Bluegrass piloted the team's ship, the Maraj (pronounced "mirage" on the series, but given that spelling on the Kenner toy). Rounding out the group is a youngster "from the planet of the mimes", named "The Copper Kidd" and usually called "Kidd" for short, a mathematical genius who spoke in whistles and computerized tones. Their bionic bodies are covered by a full-body close-fitting metal armor that only exposes the face and an arm, the armor is equipped with a retractile protective mask, retractable under-arm wings (except Bluegrass), thrusters on their heels, and laser-weapons in their shoulders. 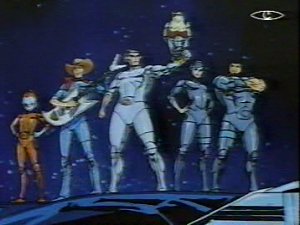 They appear in many episodes and are friendly to Melodia and Poker-Face, though the three are usually betrayed by the Mon*Star's minions. They are often seen playing cards on the planet Fence:

The Galaxy of Limbo

Despite being in outer space, Limbo has breathable air and characters are seen to fall off their vehicles as if in a gravity field. During the series various planets are shown:

The SilverHawks action figure collection based on the animated series was produced by Kenner and first released in 1987. LJN, the makers of the ThunderCats figures, originally were to produce the SilverHawks figures but decided to pass on the project at the last minute. Each figure was packaged with a companion bird and, similar to Kenner's Super Powers Collection toyline, had an action feature of some type. The second series of figures is harder to find than the first with Ultrasonic Quicksilver being the most difficult. The MonStar with Laser Lance, Copper Kidd with Laser Discs, and the Copper Racer vehicle were not produced but were shown in the 1988 Kenner toy catalog. The Hawk Haven Fortress was also never released, due to the high production costs it would incur. Many recurring characters were never made, including Yes-Man, Melodia and Poker-Face.

Several other pieces of SilverHawks merchandise were released in the 1980s, including a board game, puzzles, bed sheets, and a plastic pencil pouch with the main characters on one side. Pajamas were also produced, which included wing flaps under the arms to more resemble the characters.

In the 2011 ThunderCats remake, Mon*Star briefly appears in a cameo in the episode "Legacy". He was seen on a monitor in the bridge of Mumm-Ra's ship.

All content from Kiddle encyclopedia articles (including the article images and facts) can be freely used under Attribution-ShareAlike license, unless stated otherwise. Cite this article:
SilverHawks Facts for Kids. Kiddle Encyclopedia.