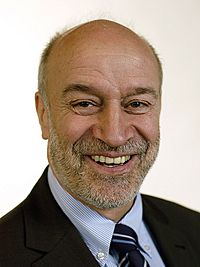 Schenk was a member of the National Council from 1994 to 2001. He represented the Canton of Bern.

He was also the coach of the Switzerland men's national ice hockey team.

All content from Kiddle encyclopedia articles (including the article images and facts) can be freely used under Attribution-ShareAlike license, unless stated otherwise. Cite this article:
Simon Schenk Facts for Kids. Kiddle Encyclopedia.