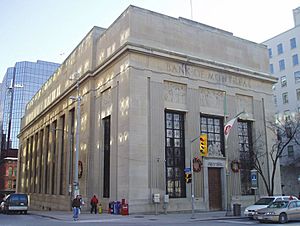 144 Wellington St., facade of the bank 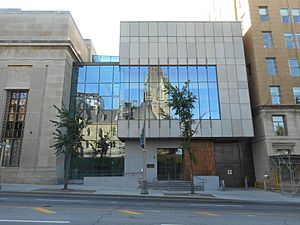 The Sir John A. Macdonald Building is a former bank building in Ottawa now owned by the federal government of Canada. It is located at 144 Wellington Street, at the corner of O'Connor Street, with a third frontage on Sparks Street, just in front of West Block of Parliament. Its façade indicates its former heritage as a Bank of Montreal branch location.

It is an example of Beaux-Arts architecture. Designed by E.I. Barott, it was built in 1930. It reflects the integration of several styles including classical elements that had long been used to design Canadian banks. The Doric columns or the classical structure are flattened. Rather than classical figures the exterior of the building is carved with scenes depicting Canadian industry and architecture. As the building is on a slope the Sparks Street entrance is a storey below the Wellington Street one. This below grade section is made of granite, while the upper level is of limestone.

On 11 Jan 2012, the building was renamed the Sir John A. Macdonald Building.

As of 2015, the building is used for parliamentary business and reception functions.

All content from Kiddle encyclopedia articles (including the article images and facts) can be freely used under Attribution-ShareAlike license, unless stated otherwise. Cite this article:
Sir John A. Macdonald Building Facts for Kids. Kiddle Encyclopedia.