Sizzle Pie is a pizza restaurant chain based in Portland, Oregon, United States.

Pizza Party HQ is a brand of Sizzle Pie.

As part of the COVID-19 pandemic, the company received between $1 million and $2 million in federally backed small business loans from Heritage Bank as part of the Paycheck Protection Program. The company stated it would allow them to retain zero jobs. 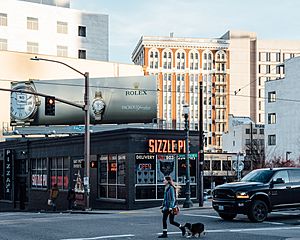 Sizzle Pie entered the Seattle market in 2016. In 2017, Sizzle Pie replaced Atomic Pizza at Portland's Hollywood Theatre. In late 2017, the chain's two locations in Brooklyn (Greenpoint and Williamsburg) closed, after operating for less than one year. There is also a location in downtown Reno, Nevada.

All content from Kiddle encyclopedia articles (including the article images and facts) can be freely used under Attribution-ShareAlike license, unless stated otherwise. Cite this article:
Sizzle Pie Facts for Kids. Kiddle Encyclopedia.