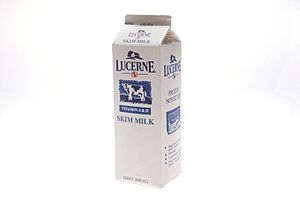 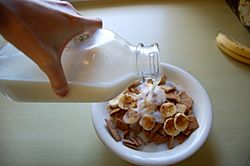 Skimmed milk being poured into a cereal bowl.

Skimmed milk (United Kingdom), or skim milk (United States of America) is made when all the cream (also called milkfat) is removed from whole milk. Sometimes, only half the cream is removed, resulting in semi-skimmed milk instead. Skimmed milk is more popular in the United States than Britain. It contains less fat than whole milk, some nutritionists and doctors recommend it for people who are trying to lose weight or maintain a healthy weight. Skim milk tends to have a slightly watery flavor, which some consumers do not enjoy.

In the UK milk is marketed and labelled as follows:

In the USA milk is marketed primarily by fat content and available in these varieties:

Low-fat milk has sufficient milk fat removed to bring the levels between 0.5-2 % It also must contain at least 8.25% solids-not-fat. It must contain 2000IU of vitamin A per quart.

Skim milk Also called non fat milk has had sufficient milk-fat removed to bring the level to less than 0.3%

All content from Kiddle encyclopedia articles (including the article images and facts) can be freely used under Attribution-ShareAlike license, unless stated otherwise. Cite this article:
Skimmed milk Facts for Kids. Kiddle Encyclopedia.