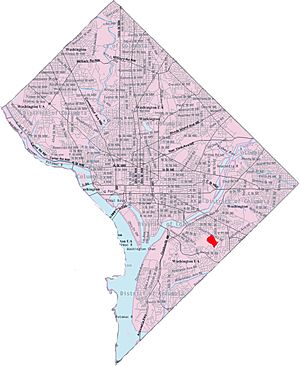 Map of Washington, D.C., with Skyland highlighted in red

Skyland is a neighborhood in Southeast Washington, D.C. It is next to Good Hope Road to the northeast, Alabama Avenue to the southeast, and Fort Stanton Park to the south and west. It is a part of the area called Anacostia.

The District government wants to rebuild the 18-acre (73,000 m2) Skyland Shopping Center at Alabama Avenue and Naylor Road, SE in Ward 7 into a mixed-used town center. Local residents asked the District government for help in the 1980s, because the current buildings were falling apart and many stores were empty. The United States Department of Housing and Urban Development decided in 2005 that the District government could not use federal money to buy Skyland because of past mistakes.

The District is working with the Rappaport Cos. and the William S. Smith Cos. on a new plan for Skyland. They want to build 320,000 square feet (30,000 m2) of retail space. They hope that the new buildings will be filled with high-quality, national stores and locally-owned shops and restaurants. Torti Gallas & Partners are architects who are drawing the new plans. The new buildings will cost $260 million. On May 25, 2011, DC Mayor Vincent Gray told Wal-Mart officials that he would not allow them to build four other new stores in the District of Columbia unless Wal-Mart also opened a store in Skyland. However, Safeway holds the exclusive right to sell groceries in the development, which may block a Wal-Mart at Skyland.

The project will also include 420 to 470 units of housing. About 80 percent of the housing units will be owned by the people who live there and 20 percent will be rented.

People are fighting the plan in court. The land owners do not want to sell their land to Rappaport and Smith. The District wants to force the current owners to sell (eminent domain).

All content from Kiddle encyclopedia articles (including the article images and facts) can be freely used under Attribution-ShareAlike license, unless stated otherwise. Cite this article:
Skyland, Washington, D.C. Facts for Kids. Kiddle Encyclopedia.