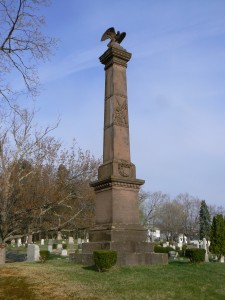 The Soldiers' Monument in Bristol, Connecticut.

Soldiers' Monument is in Bristol, Connecticut, on top of a hill in the city’s West Cemetery. The monument is an obelisk with a brownstone eagle on top. At the base on its eastern side, there is a dedication honoring the men from Bristol who fought and died for their country. To the west of the monument is a marker honoring veterans of other wars.

A committee, known as the Bristol Soldiers’ Monument Committee, was formed in 1865 when Josiah F. Peck Sr. suggested it. The purpose of this committee was to gather funds for the purpose of creating a Soldiers’ Monument. The committee decided that each member of the town should contribute $1.00 towards building a Soldiers’ Monument. However, there were logistical difficulties communicating with the 3500 people who lived in Bristol, and not all contributed. The committee also created a subcommittee, consisting of six men and seven women, whose purpose was to organize a Strawberry Festival and use the profits from the Festival to help build the monument. On October 16, 1865, Josiah F. Peck Sr. and James G. Batterson, an entrepreneur from Hartford, reached an agreement. Mr. Batterson had agreed to furnish and erect a Soldiers’ monument in Bristol. They agreed that the monument would be six feet six inches at the base, twenty five feet high, that it would be made out of the best quality Brown Portland Stone, and that there would be an inscription that is dedicated to the soldiers from Bristol who fought and died for their country. As for Mr. Peck, he agreed to complete the foundation, furnish transportation for the monument, purchase the site of land, help erect the monument, and pay Mr. Batterson $1500 for the monument and the lettering.

All content from Kiddle encyclopedia articles (including the article images and facts) can be freely used under Attribution-ShareAlike license, unless stated otherwise. Cite this article:
Soldiers' Monument in Bristol, Connecticut Facts for Kids. Kiddle Encyclopedia.