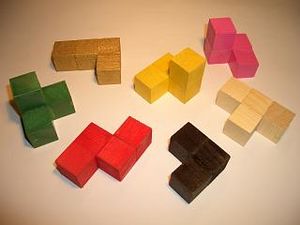 The pieces of a Soma cube 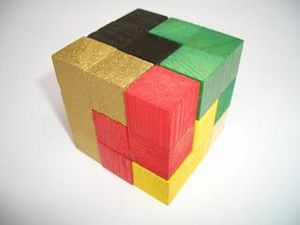 The same puzzle, assembled into a cube

The Soma cube is a solid dissection puzzle invented by Piet Hein in 1933 during a lecture on quantum mechanics conducted by Werner Heisenberg. I

Seven pieces made out of unit cubes must be assembled into a 3×3×3 cube. The pieces can also be used to make a variety of other 3D shapes.

The pieces of the Soma cube consist of all possible combinations of three or four unit cubes, joined at their faces, such that at least one inside corner is formed. There is one combination of three cubes that satisfies this condition, and six combinations of four cubes that satisfy this condition, of which two are mirror images of each other (see Chirality). Thus, 3 + (6 × 4) is 27, which is exactly the number of cells in a 3×3×3 cube.

The Soma cube was analyzed in detail by John Horton Conway in the September 1958 Mathematical Games column in Scientific American, and the book Winning Ways for your Mathematical Plays also contains a detailed analysis of the Soma cube problem.

There are 240 distinct solutions of the Soma cube puzzle, excluding rotations and reflections: these are easily generated by a simple recursive backtracking search computer program similar to that used for the eight queens puzzle. Current world record for the fastest time to solve a soma cube is 2.93 seconds and was set by Krishnam Raju Gadiraju, India.

The seven Soma pieces are six polycubes of order four, and one of order three:

Piet Hein authorized a finely crafted rosewood version of the Soma cube manufactured by Theodor Skjøde Knudsen's company Skjøde Skjern (of Denmark). Beginning in about 1967, it was marketed in the U.S. for several years by the game manufacturer Parker Brothers. Plastic Soma cube sets were also commercially produced by Parker Brothers in several colors (blue, red, and orange) during the 1970s. The package for the Parker Brothers version claimed there were 1,105,920 possible solutions. This figure includes rotations and reflections of each solution as well as rotations of the individual pieces. The puzzle is currently sold as a logic game by ThinkFun (formerly Binary Arts) under the name Block by Block. 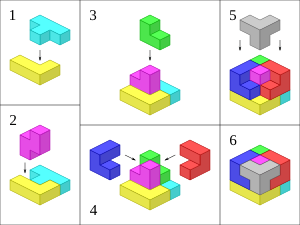 One of the possible ways of assembling the Soma cube

Solving the Soma cube has been used as a task to measure individuals' performance and effort in a series of psychology experiments. In these experiments, test subjects are asked to solve a soma cube as many times as possible within a set period of time. For example, In 1969, Edward Deci, a Carnegie Mellon University graduate assistant at the time, asked his research subjects to solve a soma cube under conditions with varying incentives in his dissertation work on intrinsic and extrinsic motivation establishing the social psychological theory of crowding out.

In each of the 240 solutions to the cube puzzle, there is only one place that the "T" piece can be placed. Each solved cube can be rotated such that the "T" piece is on the bottom with its long edge along the front and the "tongue" of the "T" in the bottom center cube (this is the normalized position of the large cube). This can be proven as follows: If you consider all the possible ways that the "T" piece can be placed in the large cube (without regard to any of the other pieces), it will be seen that it will always fill either two corners of the large cube or zero corners. There is no way to orient the "T" piece such that it fills only one corner of the large cube. The "L" piece can be oriented such that it fills two corners, or one corner, or zero corners. Each of the other five pieces have no orientation that fills two corners; they can fill either one corner or zero corners. Therefore, if you exclude the "T" piece, the maximum number of corners that can be filled by the remaining six pieces is seven (one corner each for five pieces, plus two corners for the "L" piece). A cube has eight corners. But the "T" piece cannot be oriented to fill just that one remaining corner, and orienting it such that it fills zero corners will obviously not make a cube. Therefore, the "T" must always fill two corners, and there is only one orientation (discounting rotations and reflections) in which it does that. It also follows from this that in all solutions, five of the remaining six pieces will fill their maximum number of corners and one piece will fill one fewer than its maximum (this is called the deficient piece). 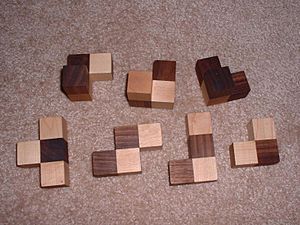 An easier variant of the puzzle, where alternating cubes have different colors

The Bedlam cube is a 4×4×4 sided cube puzzle consisting of twelve pentacubes and one tetracube. The Diabolical cube is a puzzle of six polycubes that can be assembled together to form a single 3×3×3 cube.

All content from Kiddle encyclopedia articles (including the article images and facts) can be freely used under Attribution-ShareAlike license, unless stated otherwise. Cite this article:
Soma cube Facts for Kids. Kiddle Encyclopedia.