The Somerville Community Path is a paved mixed-use path in Somerville, Massachusetts, running 1.3 miles (2.1 km) from Massachusetts Avenue to Lowell Street via Davis Square. Opened in segments between 1985 and 2015, it follows part of the former Fitchburg Cutoff rail line. A 1.9-mile (3.1 km) extension to East Cambridge will open in 2021 as part of the Green Line Extension project. 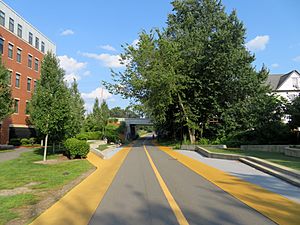 The east part of the Fitchburg Cutoff opened in 1870, connecting the Lexington and Arlington Railroad (Lexington Branch) to the Boston and Lowell Railroad. Only used for Boston and Maine Railroad freight trains after 1926, the line was abandoned as far east as Cedar Street in 1979 to allow construction of the Red Line Northwest Extension. The Alewife Linear Park opened from [[{{{station}}} (MBTA station)|{{{station}}}]] to [[{{{station}}} (MBTA station)|{{{station}}}]] in 1985. The Somerville Community Path opened 0.6 miles (0.97 km) from Davis Square to Cedar Street in 1994, with the 0.4-mile (0.64 km) Massachusetts Avenue–Davis Square segment of the Alewife Linear Park becoming part of the Community Path. In 2013, construction began on a 0.3-mile (0.48 km) extension to Lowell Street. The $2.2 million extension opened in mid-2015, with an official dedication ceremony on August 19.

In April 2014, state officials announced that a 1.9-mile (3.1 km), $39 million extension of the Community Path to East Cambridge would be built as part of the Green Line Extension (GLX) project. Beginning in 2015, the state began a major re-evaluation of the GLX project due to singificantly increased costs. In May 2016, the state indicated that the Community Path would only be built as far as Washington Street in the revised plan to avoid a costly bridge. In some sections, the path would be lowered to track level to eliminate costly retaining walls, resulting in fewer connections to cross streets than previously planned.

A consortium called GLX Constructors was selected as the winner for re-bid project in November 2017. Their proposal reduced costs enough to add the full Community Path extension back into the plan. However, the plans call for a 10-foot (3.0 m)-wide path, narrower than existing portions and the 12-foot width recommended in federal guidelines. Cycling advocates have raised concerns about safety of the narrowed path given the expected levels of bicycle traffic. The GLX and path extension are expected to be completed in late 2021. The 1,400-foot (430 m)-long bridge over the Fitchburg Line and Green Line reaches 50 feet (15 m) tall, with grades of 4.8% on the approaches.

All content from Kiddle encyclopedia articles (including the article images and facts) can be freely used under Attribution-ShareAlike license, unless stated otherwise. Cite this article:
Somerville Community Path Facts for Kids. Kiddle Encyclopedia.