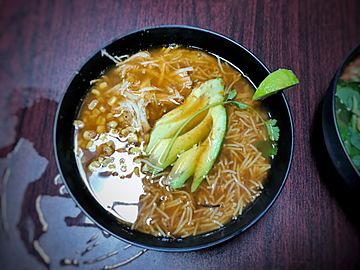 Sopa de fideo with corn and chicken, garnished with avocado and a lime wedge

Sopa de fideo, also referred to as sopita de fideo, is a stock-based noodle soup that is a part of the cuisines of Spain, Mexico, Tex-Mex cuisine, and Cavite, a province in the Philippines. It has been suggested that the dish may have originated in Spain.

The definition of the Spanish word "sopa" is "soup". However, sopas also constitute side dishes that are a part of Mexican-American cuisine. 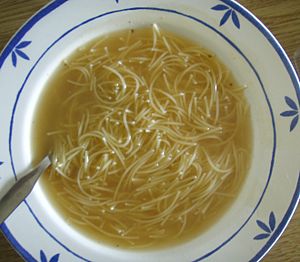 Sopa de fideo is a stock-based noodle soup in Mexican cuisine and Tex-Mex fusion cuisine. Fideo means noodle, usually used in the plural fideos to mean vermicelli. The noodles used in the soup are typically thin, and are typically broken or cut and then browned separately prior to being stewed with the other soup ingredients. Fideo noodles, a type of thin pasta, are traditionally used, vermicelli noodles are often used, and angel hair pasta is also sometimes used. Fideo noodles are sold at some Latin grocery stores. Additional soup ingredients can include vegetables such as bell pepper, onion and garlic, tomatoes, tomato sauce, chicken, chili peppers, vegetable oil, salt and pepper.

Sopa de fideo can be an affordable soup to prepare that is flavorful and provides considerable nourishment. Some people consider it to be a comfort food.

The sopa de fideo originates in Spain where it is commonly consumed throughout the country. For example, residents of Cavite, Philippines, were first introduced to the soup by Spaniards in the 1600s. It has been described as a comfort food of Cavite. The Handbook of Mexican American Foods published by the Intercultural Development Research Association in 1982 describes sopa de fideo as a Spanish-style vermicelli and as "vermicelli prepared in the same manner as sopa de arroz".

All content from Kiddle encyclopedia articles (including the article images and facts) can be freely used under Attribution-ShareAlike license, unless stated otherwise. Cite this article:
Sopa de fideo Facts for Kids. Kiddle Encyclopedia.