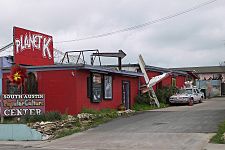 The Austin Museum of Popular Culture at its former location

SouthPop was formally established in 2005 to collect and display concert posters by a group of artist known as the Armadillo Art Squad who came together around the Armadillo World Headquarters.

It was born from a community art collective known as the South Austin Museum of Popular Culture which had coalesced in 2004 around the private files of Henry Gonzalez. The collections expanded to include other live music venues of the 1970s including Threadgills, the Vulcan Gas Company, the Austin Opry House, and Antone's. Eventually the purpose of SouthPop was to preserve the legacy of Austin's counterculture and popular arts through exhibitions, collection, and scholarship. The center has evolved to become a collecting and exhibiting center for photography, prints, and non-traditional art and has widened the visibility of the Austin cultural scene.

The South Austin Museum of Popular Culture is an independent resource available to those who want to learn more about the Austin's cultural history and is not supported by any government institution.

Southpop's outdoor memorial, 'Wall of Fame', as Austin humorist John Kelso calls it, has photos of over 150 people. It honors them for their contribution to Austin's creative scene. The outdoor wall includes both the famous and the obscure, from Bill Hicks, Stevie Ray Vaughan and Janis Joplin to Bill Livingood, Bud Shrake, and Poodie Locke, Willie Nelson's stage manager.

The museum is the subject of many articles in the Austin Chronicle, who in 2004 distinguished the museum as the "Best Place to Art Trip." The New York Times included SAMOPC in a Frugal Traveler video.

All content from Kiddle encyclopedia articles (including the article images and facts) can be freely used under Attribution-ShareAlike license, unless stated otherwise. Cite this article:
South Austin Popular Culture Center Facts for Kids. Kiddle Encyclopedia.