The South Brisbane Post Office was designed by FDG Stanley and W Macfarlane was the contractor. The one-room post office occupied the ground floor. The postmaster's accommodation included three bedrooms and verandah upstairs and basement dining room, kitchen and bedroom. The original symmetrical front facade included a ground floor arcade with an open verandah above. The central focus was the arched masonry frontispiece.

About 1897, the council with the help of a government subsidy built the corner structure and the complex became known as the South Brisbane Municipal Library and Technical College. John Henry Burley is said to be the architect.

The third stage is the concert hall designed by Alexander Brown Wilson in 1902. This building included Technical College classrooms in the basement.

In 1909 the council was offered the Richard John Randall collection of artwork. About the same time, with the Queensland Government take-over of the Technical College, many classrooms became vacant. The council decided to convert the library on the first floor into an art gallery.

Architect George David Payne was employed to convert the former library to the Randall Art Gallery and extend the concert hall and supper room. About 1911 the hall was enlarged at the river end and the supper room extended so that they were capable of seating 600 and 400 persons respectively. The Gallery was officially opened in July 1914.

Between 1910 and 1920 the post office section was rendered and the front enclosed.

The Greater Brisbane City Council took over the structure in 1925 and the library continued to function until 1973. However, the Randall collection was transferred to the Brisbane City Hall. For many years the concert hall continued to be well patronised particularly during the Second World War (1939–45).

Between 1973 and about 1987 the building was neglected and vandalised. The derelict library was refurbished for World Expo '88 as a convention centre and exclusive club. The exterior was painted and the interior was substantially altered to provide two large conference rooms and club rooms. The former Post Office section was converted to modern offices and concrete stairs installed.

It now houses the Griffith University Film School, which forms part of the Queensland College of Art. 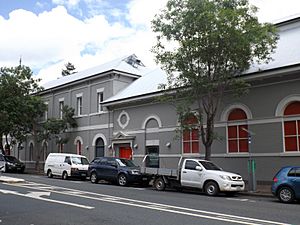 The former South Brisbane Library consists of three interlinking buildings. The two-storeyed former Post Office and Library both have Stanley Street frontages, similar gable roofs and string courses that delineate the two floors. The former City Concert Hall is a single-storeyed auditorium with a Dock Street frontage. Both the hall and corner building are polychromatic brick structures with matching arched windows.

The first stage (1881) is a two-storeyed masonry building with basement. The hipped roof has a gablet and there was a frieze above the verandah roof. The front facade has multi-paned windows, a pair of faceted bays and raked verandah roof supported by large timber brackets.

The 1890s section, on the corner, is an asymmetrical brick building. It has a gable roof, a gablet of similar proportions to the post office, and a tower on the southern corner. The World Expo '88 interior refurbishment included the carpeting and painting of the interior, a new staircase from the front foyer to the first floor and modern fretwork brackets.

The third stage (1902), at the rear, is a long rectangular building with light coloured horizontal strings and window arches. The corrugated iron hipped roof has a continuous raised roof ventilator. The interior walls has timber panelled dados, plaster raked ceilings and an unadorned proscenium stage. French doors open onto a verandah.

A gallery and new verandah were added as part of the Expo renovations.

The former South Brisbane Library was listed on the Queensland Heritage Register on 21 October 1992 having satisfied the following criteria.

The former South Brisbane Library is significant historically for its importance as the former Post and Telegraph Office, mechanic's institute, technical college, library, art gallery, and concert hall of South Brisbane, and remains a tangible reminder of civic identity. It is also significant as a marker of the former alignment of Stanley Street, the main commercial thoroughfare of South Brisbane in the late 19th and early 20th centuries.

The building demonstrates a visual cohesiveness, despite having been constructed in several stages to the designs of at least three architects, and makes a significant landmark and aesthetic contribution to the historic precinct centred on South Brisbane Memorial Park. It is a significant component of the riverside townscape as seen from the city.

The building is an important example of the public work of Brisbane architect AB Wilson.

All content from Kiddle encyclopedia articles (including the article images and facts) can be freely used under Attribution-ShareAlike license, unless stated otherwise. Cite this article:
South Brisbane Library Facts for Kids. Kiddle Encyclopedia.