South River Club refers to both a social club located just south of Annapolis, Maryland and (more recently) to the historic building in Anne Arundel County, Maryland where the club meets.

The South River Club (also known as "The Old South River Club") survives today as one of the oldest, continuously active organizations of its type in America. There is evidence that the club itself existed in 1732 and perhaps as early as 1700. The date of its founding remains unknown because the early records were lost when the first clubhouse burned down. Club records show that it existed before February 11, 1742 when a resolution was passed to attempt to record all previous members' names. As early as 1746, the club was referred to as "The Ancient South River Club" in the Maryland Gazette.

The early members included prominent landowners, merchants, and the local doctor and clergyman, all of whom lived within a 10-mile radius of the clubhouse.

The members of the club meet at the clubhouse four times per year for feasts prepared in the detached kitchen. Women are only allowed in the clubhouse on "Pilgrimage Days." 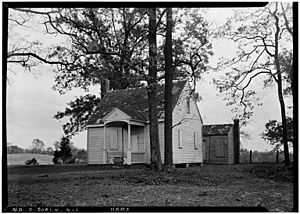 It is not clear where the first clubhouse stood. There is some speculation that it was in Londontowne, Maryland, but sufficient doubt remains.

Built in 1742, on land purchased from Captain Thomas Gassaway, son of Colonel Nicholas Gassaway, the present structure is a small frame, 1+1⁄2-story one-room clubhouse with a gable roof and a narrow exterior chimney on the east gable end. It was listed on the National Register of Historic Places in 1969.

All content from Kiddle encyclopedia articles (including the article images and facts) can be freely used under Attribution-ShareAlike license, unless stated otherwise. Cite this article:
South River Club Facts for Kids. Kiddle Encyclopedia.