Londontowne is an unincorporated area and former census-designated place (CDP) in Anne Arundel County, Maryland, United States, and the site of a former colonial seaport founded on the South River in 1683. The population was 7,595 at the 2000 census. At the 2010 census, the area was delineated as the Edgewater CDP.

London Town was a colonial seaport town founded in 1683 near Annapolis. The original wharf was built by Colonel William Burgess, one of the area's original settlers. He parceled his land and sold it, leading to the creation of the town with the Act of 1683. It was once considered as the site for the capital of Maryland, a state of the United States of America. It was as prominent a city in trade as Annapolis and Williamsburg, Virginia. A series of events caused it to decline and disappear by the 19th century, including its non-selection as a tobacco inspection station, economic depression, and the Revolutionary War. 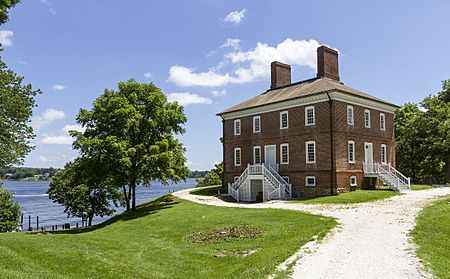 Today, the area of the old town comprises the 23-acre (9.3 ha) Historic London Town and Gardens, owned by Anne Arundel County and operated by the London Town Foundation, a 501(c)(3) non-profit. The park includes the London Town Publik House, listed on the National Register of Historic Places and designated a National Historic Landmark, as well as reconstructed period buildings, a public museum, an archaeology lab, and extensive gardens. The park offers guided tours, musket fire demonstrations, and various other educational events, and its facilities may be rented as an event venue.

London Town's 8-acre (3.2 ha) woodland gardens began in the late 1960s as naturalized shade gardens. Today they include an azalea glade with both deciduous and evergreen plantings; a camellia walk with winter blooming camellias; a holly collection; and a winter garden featuring plants of winter interest, with evergreens such as mountain laurel (Kalmia latifolia).

There were 2,927 households out of which 31.8% had children under the age of 18 living with them, 55.2% were married couples living together, 10.1% had a female householder with no husband present, and 30.3% were non-families. 22.9% of all households were made up of individuals and 6.6% had someone living alone who was 65 years of age or older. The average household size was 2.56 and the average family size was 3.02.

All content from Kiddle encyclopedia articles (including the article images and facts) can be freely used under Attribution-ShareAlike license, unless stated otherwise. Cite this article:
Londontowne, Maryland Facts for Kids. Kiddle Encyclopedia.