The Civic Centre is a municipal building located in the Cultural Quarter area within the city of Southampton. It comprises offices occupied by Southampton City Council, the SeaCity Museum, the Guildhall, the Southampton City Art Gallery, and the city library. It was designed by the English architect Ernest Berry Webber in the Classical style in 1929 and constructed over a ten-year period. It was completed in 1939. Pevsner's Hampshire: South describes it as "the most ambitious civic building erected in the provinces in the interwar years". It was designated as a Grade II* listed building in 1980.

Since the 1870s, there was debate in the council over the housing of the borough offices: all departments were currently scattered around the town, making co-ordination and timely response fairly difficult, with the old Audit House opposite Holy Rood Church now being totally inadequate.

The first serious attempt at constructing a civic centre to accommodate these scattered departments occurred in 1924. In a public meeting in the following year, however, the proposals, presented by former mayor and alderman Sidney Kimber, were met with objections, including from notable residents, over its location, size, and practicality.

As a result, an architectural competition was held and the then-president of the Royal Institute of British Architects, J A Gotch, selected H Austen-Hall as the competition assessor. The designs of architect Ernest Berry Webber were chosen, involving four blocks, erected as separate contracts, but interconnected to create a distinct building. The plans were costed just within the £385,000 budget. In 1928, the necessary land was appropriated.

On 1 July 1930, Prince Albert, Duke of York, laid the foundation stone, in a ceremony presided over by mayor Hector Young. 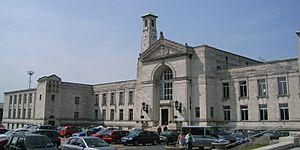 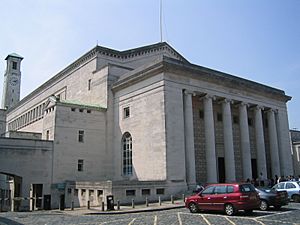 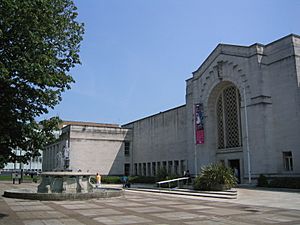 The north (arts) wing, hosting the art gallery and library.

The first block to be opened was the south block, the municipal offices. This too was opened by the Duke of York, and his wife, the Duchess of York, on 8 November 1932.

The second block, opened on 3 November 1933 by Viscount Sankey, the Lord Chancellor, was the west block, the law courts and the police headquarters. The west block includes the famous clock tower, known colloquially at the time as Kimber's Chimney, after the former mayor. The clock tower was not part of the original design, but was added later. Before its construction, Kimber and Webber tied a balloon on the site at the proposed height, and made sure it was visible from various points in the city. Every four hours the first verse of the hymn O God, Our Help in Ages Past is played. In 2001 the law courts vacated the building to a larger complex, which incorporates some of the original Ordnance Survey buildings. Then in 2006 the Police announced they too would leave. In 2012 the SeaCity Museum moved into the refurbished West wing as well as into a modern pavilion extension.

The North wing hosts Southampton City Art Gallery and Southampton Central Library. This began later than the others, and late alterations to the designs were required to incorporate a public library, that was not originally planned for. This was opened in 1939. The expansion of this wing led to an increase in costs for the project, but the budget increase was approved by Parliament.

All content from Kiddle encyclopedia articles (including the article images and facts) can be freely used under Attribution-ShareAlike license, unless stated otherwise. Cite this article:
Southampton Civic Centre Facts for Kids. Kiddle Encyclopedia.