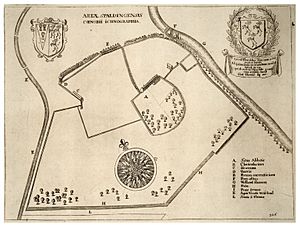 The priory precinct in a 17th-century engraving by Wenceslas Hollar

Spalding Priory was a small Benedictine house in the town of Spalding, Lincolnshire, dedicated to St Mary the Virgin and St Nicholas.

Until 1220, Alkborough Priory Cell was a dependency of Spalding. After 1071 one monk only remained in Spalding, so the house was refounded in 1074 as a dependent priory of St Nicholas's Abbey, Angers. The monks secured their independence from Angers in 1397, and remained so until 1540, when the house was surrendered at the dissolution. Six human skeletons found during building work in Bridge Street are presumed to indicate the site of the Priory burial ground.

All content from Kiddle encyclopedia articles (including the article images and facts) can be freely used under Attribution-ShareAlike license, unless stated otherwise. Cite this article:
Spalding Priory Facts for Kids. Kiddle Encyclopedia.