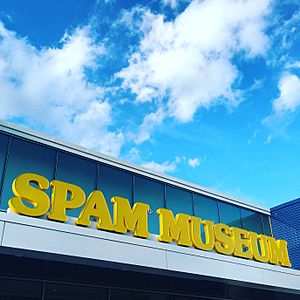 The Spam Museum is an admission-free museum in Austin, Minnesota dedicated to Spam, a brand of canned precooked meat products made by Hormel Foods Corporation. The museum tells the history of the Hormel company, the origin of Spam, and its place in world culture.

The Spam Museum originated in 1991 as the Hormel Foods First Century Museum, when Hormel opened a small storefront company museum in celebration of the company's 100 year anniversary. Located in Austin's Oak Park Mall, Hormel later re-branded it as the Spam Museum.

A much-larger Spam-focused museum opened in September 2001. The 16,500-square foot space included a theater, historical displays, family activities and games, and a gift shop. The lobby of the museum featured a wall of Spam with more than 3,300 Spam cans and, for many years, the theatre showed a short film entitled "SPAM: A Love Story." In late 2014, the museum temporarily closed while it moved to a new downtown location. 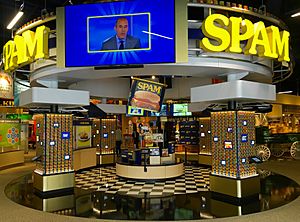 Can Central Exhibit at the Spam Museum

The location in downtown Austin is approximately 14,000 square feet in size and comprises seven main galleries. These include Can Central, "the heart of the museum"; the World Market, where visitors can learn about the advertising and use of Spam and Spam recipes from 44 different nations; a World War II-themed exhibit explaining the importance of Spam as a staple for American troops; and Spam Brand 101, an interactive exhibit where visitors learn about 15 varieties of Spam and families are able to compete in the "assembly" of mock cans of Spam. Many of the exhibits include games, interactive videos, and hands-on activities.

All content from Kiddle encyclopedia articles (including the article images and facts) can be freely used under Attribution-ShareAlike license, unless stated otherwise. Cite this article:
Spam Museum Facts for Kids. Kiddle Encyclopedia.