Splish Splash is a 96-acre (390,000 m2) water park in Calverton, New York. It features 30 rides and runs from May through September. Travel Channel ranked Splish Splash the third best water park in the United States in the year 2009, but does not hold the title anymore.

Splish Splash was built in 1989, headed by Chip Cleary with the original owners being the same as Adventureland. It opened in May 1991 with three body slides, two speed slides, two kiddie pools, two tube slides, a lazy river, and a restaurant. In 1995, the Lazy River opened. The park has been owned and operated by Palace Entertainment since 1999. Today the lazy river is 1,300 feet (400 m) long and is accompanied by 18 water slides, 2 wave pools, several kiddie attractions, and a spray and play pirate theme attraction. It spans over 90 acres (360,000 m2). In 2006, Splish Splash added a new funnel-shaped ride called Alien Invasion. In July 2008, they announced that they would be adding 7 rides over the next few years, including Dr. Von Dark's Tunnel of Terror for 2009, Kahuna Bay for 2011, Bootlegger's Run for 2013, The Battle of Mutiny Bay for 2014, and two new rides introduced in 2018, Riptide Racer and Bombs Away. 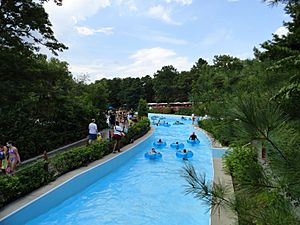 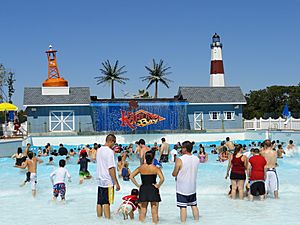 Attractions for Kids Under 54 inches Only

Check out the daily bird show!

Times vary throughout the season

All content from Kiddle encyclopedia articles (including the article images and facts) can be freely used under Attribution-ShareAlike license, unless stated otherwise. Cite this article:
Splish Splash Facts for Kids. Kiddle Encyclopedia.