The spotted-tail salamander (Eurycea lucifuga), also known as a "cave salamander", is a species of brook salamander.

The spotted-tail salamander is a relatively large lungless salamander, ranging in size from 10 to 20 cm in total body length. The tail makes up a significant proportion of the total length, up to 60–65%. Post-metamorphic individuals have orange to reddish orange backs and a pale, unmarked ventral surface. The dorsal surface of the body is heavily marked with irregularly spaced spots and dashes. The limbs of the spotted-tail salamander are long. There are 14–15 costal grooves on the side of the body. This species has a prehensile tail.

Spotted-tail salamanders are typically found in areas with exposed limestone or other calcareous rock, particularly in crevices of rock faces, bluffs and caves. This species is also frequently found hundreds of metres from the mouths of caves, far beyond the twilight zone of the cave. Despite the alternative name, the spotted-tail salamander is not restricted to caves, and may be found in forests near bluffs and rocky crevices and around springs, and also under moist rocks and logs. This species is found in Alabama, Arkansas Illinois, Missouri, Kentucky, Virginia, West Virginia, Oklahoma, Tennessee, Kansas, Indiana, and Ohio. 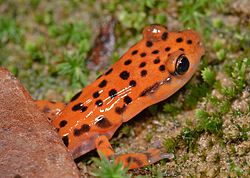 The courtship and mating season is not well documented in this species, although available data suggests it occurs in the summer, continuing to early autumn. Observations made from a pair maintained in captivity are summarized as follows: The courtship of this species is described as similar to that of the Northern two-lined salamander; where the male nudges and rubs his chin on the females’ head and snout. The male may engage in ‘push-ups’ using his hind legs, and begin to position the base of his tail under the females. If receptive, she will straddle his tail as they walk in unison, while the male arches his back. A spermatophore, approximately 4 mm high is deposited on the ground in the females path, which she picks up with her cloaca. After mating, there seems to be a prolonged period in which the females deposit eggs, taking place from September to February. Few biologists have found eggs of the spotted-tail salamander, suggesting that females seek difficult to access places, such as springs, streams and rim stone pools deep within caves and crevices. In Missouri, eggs have been found laid singly or attached to the sides of rimstone pools, on silt deposits or on the bottom of small pools. Recently laid eggs are white, with two jelly membranes surrounding the embryo. Egg diameter ranges from 2.5 to 3.2 mm. Females can produce between 5–120 eggs.

Larval spotted-tail salamanders appear similar to other larval Eurycea. Larvae have been found in both surface streams, and in cave streams and pools. It is thought that larvae found in surface streams may have been washed out of caves and crevices by heavy rains. Spotted-tail salamander larvae are predators, and feed primarily on benthic invertebrates, such as snails, ostracods, copepods, isopods, mayflies, stoneflies, beetles and flies, of which ostracods, snails and fly larvae are the most common dietary item. Prey is captured by slowly crawling over the substrate and grasping the invertebrate by the mouth and swallowing it whole, thus prey is limited by the gape of the salamanders mouth. From hatching to metamorphosis to a terrestrial adult takes between 6 and 18 months, although this period is variable by region. Larvae may attain sizes of 70 mm (33 mm snout-to-vent-length) by the time of metamorphosis.

All content from Kiddle encyclopedia articles (including the article images and facts) can be freely used under Attribution-ShareAlike license, unless stated otherwise. Cite this article:
Spotted-tail salamander Facts for Kids. Kiddle Encyclopedia.