Squantz Pond State Park is a public recreation area located 10 miles (16 km) north of Danbury in the town of New Fairfield, Connecticut. The state park encompasses 172 acres (70 ha) on the southwestern shore of 270-acre (110 ha) Squantz Pond, offering opportunities for boating, swimming, fishing, and hiking. The park is bordered on the west by Pootatuck State Forest and is managed by the Connecticut Department of Energy and Environmental Protection.

The state park was established through the purchase of a 138-acre farm in 1926. The pond and state park are named for Chief Squantz, a leader of the Schaghticoke tribe.

The park offers swimming, fishing, and scuba diving as well as a launch for motorized boating. The park also has canoe and kayak rentals, picnicking facilities, and a nature center. The park's hiking trails grant access to the adjacent Pootatuck State Forest. 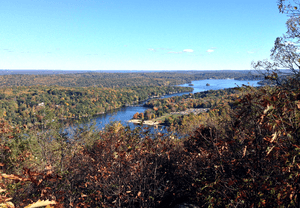 From the west side, the main trail starts from the north end of the picnic area; it follows the edges of the lake’s western shoreline for 2 miles to a peninsula that juts out into the lake and has an unobstructed view of the entire lake.

An unmarked trail goes along the west shoreline of Squantz Pond; old reddish-brown markers can still be seen. The trail parallels the shoreline. It is mostly a hemlock laden area with rapidly flowing streams splashing down to the lake and interesting rock formations. A little less than half-way there, an open area and rock on which to stand offer a look back at the beach at Squantz Pond State Park. Also along the way, a red-blazed trail comes down the steep grade from Pootatuck Mountain. The trail ends near Worden Brook where a bushwhack south leads to the main trail.

All content from Kiddle encyclopedia articles (including the article images and facts) can be freely used under Attribution-ShareAlike license, unless stated otherwise. Cite this article:
Squantz Pond State Park Facts for Kids. Kiddle Encyclopedia.