A squeaky toy, squeak toy, squeaker toy, or squeeze toy, is a soft, hollow toy made from flexible materials such as rubber or vinyl, and usually equipped with a small device known as a squeaker. 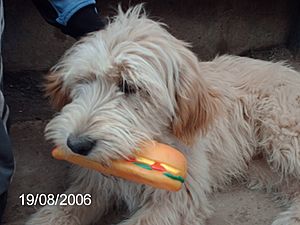 Squeaky toy in the shape of a submarine sandwich

When the toy is squeezed, air is forced through the squeaker, resulting in a high-pitched sound, such as a squeak, or the sound of a toy horn or whistle. The tone and duration of the sound may depend on the size of the squeaker, the amount of air squeezed out of the toy, and the speed with which it is squeezed. When the toy is not being squeezed, it resumes its normal shape and re-inflates. Air returning into the toy through the squeaker may or may not make a sound, depending on the design of the squeaker and the speed at which air re-enters.

The high-pitched noise produced by squeaky toys quickly attracts the attention of infants and small children, while their soft, squeezable nature makes them safe for young children to handle. Squeaky toys are also popular with pets, and examples shaped like bones or small furry animals are commonly marketed for dogs. 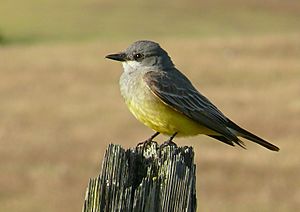 Small animals are sometimes compared with squeaky toys. A particularly apt example is the desert rain frog, the subject of a widely viewed video titled "World's Cutest Frog," regularly described as making a noise like a squeaky toy. The resemblance is enhanced by the fact that the frog vocalizes by inflating its body, and then exhaling (relatively) large quantities of air, as if being squeezed. The calls of certain birds have also been compared to squeaky toys; in particular those of the western kingbird, Mississippi kite, and sulphur-bellied flycatcher of North America, and the blue nuthatch of southeast Asia.

All content from Kiddle encyclopedia articles (including the article images and facts) can be freely used under Attribution-ShareAlike license, unless stated otherwise. Cite this article:
Squeaky toy Facts for Kids. Kiddle Encyclopedia.