The Mississippi kite (Ictinia mississippiensis) is a small bird of prey in the family Accipitridae. Mississippi kites have narrow, pointed wings and are graceful in flight, often appearing to float in the air. It is not uncommon to see several circling in the same area.

Adults are gray with darker gray on their tail feathers and outer wings and lighter gray on their heads and inner wings. Males and females look alike, but the males are slightly paler on the head and neck. Young kites have banded tails and streaked bodies. It is 12 to 15 inches (30–37 cm) beak to tail and has a wingspan averaging 3 feet (91 cm). Weight is from 214 to 388 grams (7.6-13.7 oz). Their call is a high-pitched squeak, sounding similar to that of a squeaky toy. 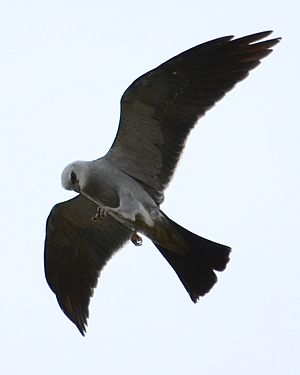 A Mississippi kite looks at a bee caught in midair

Their diet consists mostly of insects which they capture in flight. They eat cicada, grasshoppers, and other crop-damaging insects, making them economically important. They have also been known to eat small vertebrates, including birds, amphibians, reptiles, and small mammals.

Mississippi kites breed across the central and southern United States. Breeding territory has expanded in recent years and Mississippi kites have been regularly recorded in the southern New England states and a pair has successfully raised young as far north as Newmarket, New Hampshire. They migrate to southern subtropical South America in the winter. Mississippi kites usually lay two white eggs (rarely one or three) in twig nests that rest in a variety of deciduous trees. In the past 75 years, they have undergone changes in nesting habitat from use of forest and savanna to include shelterbelts and are now very common nesters in urban area that are highly populated in the western south-central states.

Mississippi kites nest in colonies and both parents (paired up before arriving at the nesting site) incubate the eggs and care for the young. They have one clutch a year which takes 30 to 32 days to hatch. The young birds leave the nest another 30 to 35 days after hatching. Only about half of kites successfully raise their young. Clutches fall victim to storms and predators such as raccoons and great horned owls. Because of the reduced amount of predators in urban areas, Mississippi kites produce more offspring in urban areas than rural areas. They have an average lifespan of 8 years.

While the Mississippi kite is not an endangered species, it is protected under the Migratory Bird Treaty Act of 1918, which protects the birds, their eggs, and their nests (occupied or empty) from being moved or tampered with without the proper permits. This can make the bird somewhat of a nuisance when it chooses to roost in populated urban spots such as golf courses or schools. The birds protect their nests by diving at perceived threats, including humans. Staying at least 50 yards from nests is the best way to avoid conflict with the birds. If unavoidable, wearing a hat or waving hands in the air should prevent contact from being made but will not prevent the diving behavior.

All content from Kiddle encyclopedia articles (including the article images and facts) can be freely used under Attribution-ShareAlike license, unless stated otherwise. Cite this article:
Mississippi kite Facts for Kids. Kiddle Encyclopedia.