St. Ann & the Holy Trinity Church is a historic Episcopal church located at the corner of Montague and Clinton streets in the Brooklyn Heights neighborhood of Brooklyn, New York City. 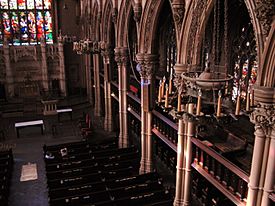 The building was built as Church of the Holy Trinity, and opened in 1847. Following years of controversy, the parish was closed in 1957, and the building stood mostly empty for the next 12 years. The present name of the parish reflects the fact that St. Ann's, the oldest Episcopal parish in Brooklyn, moved into the then empty Holy Trinity building in 1969. The church possesses some of the earliest figural stained-glass windows made in the United States, crafted by William Jay Bolton. The church was declared a National Historic Landmark in 1987.

The designer for Holy Trinity was prominent 19th century American architect Minard Lafever, with stained glass by William Jay Bolton and John Bolton. In 1859 English architect Gervase Wheeler was hired to enlarge and make improvements in the chancel such as modifications to the reading desk and adding pews; Wheeler was directed to follow the original plan in his work.

A rectory was constructed immediately west of the church between 1895 and 1897. The ground floor of this building now serves as the parish hall.

Following the departure of the St. Ann Center for Restoration and the Arts in 1999, the church complex continued to lease school, office, programming, rehearsal and concert space to a wide range of community service and arts groups. However, in 2013, full-time tenants were moved out of the Parish House.

St. Ann's Church (organized 1787) was originally named in honor of Ann Ayscough Sands (1761–1851), who was an early patron with her husband Joshua Sands. The church previously occupied the elaborate High Victorian Gothic building still standing on the northeast corner of Clinton and Livingston streets, built 1877-1878 to designs by James Renwick Jr. of Renwick & Sands. That church, which featured stained glass by Henry E. Sharp, was sold to the Packer Collegiate Institute.

The windows of St. Ann & the Holy Trinity Church were created by William Jay Bolton with the assistance of his brother, John Bolton, between 1845 and 1848. Though preceded by a figural window Bolton made for Christ Church Priory in Pelham, NY, these windows are the first complete canon, or set, of figural stained glass windows made in North America. The Bolton windows consist of six distinct sets totaling 55 glass installations, of which 54 remain.

When the church reopened in 1969, the problem of repairing the large building after a long period of deferred maintenance initiated many conservation projects and campaigns for the complicated and costly task of restoring the church and its endangered stained glass windows. The World Monuments Fund in collaboration with the St. Ann's Center for Restoration and the Arts initiated projects in 1988 and continued repairs led to the site's listing in the World Monuments Watch in 2002 and 2004.

One of the stained glass windows, a 19' high and 10' wide window (5.8 x 3 meters) from the church's organ loft are on display in the American wing of the Metropolitan Museum of Art. The window depicts a musical scene of Miriam and Jubal standing beneath an arrangement of musical instruments articulated in bright purple and gold painted glass

The Peabody Memorial Organ was built by Ernest M. Skinner in 1925. It is the third instrument to be installed since the church opened in 1847. The organ was designed by Louis Robert [nl] and built by Ernest Skinner as his Opus #524, the gift to the church from parishioner and financier George Foster Peabody in memory of his brother. The organ comprises 4,718 pipes, ranging from 2 inches to 32 feet in length, as well as 20 chimes and a 61-note celesta. In 1999, it was recognized by the Organ Historical Society as "An Historic Instrument of Special Merit" — the musical equivalent of Landmark status. It is the largest E.M. Skinner organ in New York City.

Virgil Fox and Louis Vierne, organist at the Cathedral of Notre Dame in Paris were among the world-famous organists that played the organ in Brooklyn.

Gregory Eaton, prior Dean of the Brooklyn Chapter of the American Guild of Organists was the director of music and organist from 1993 to 2014.

In 1979 the New York Landmarks Conservancy, a private, not-for-profit organization started a preservation program for the church called the St. Ann Center for Restoration And Arts. Through the program's efforts the chancel was renovated, 64 stained glass windows restored and the exterior fence repaired.

The church received a Sacred Sites Grant of $10,000 for brownstone façade and roof restoration of parish house wing in 2014. A site visit confirmed that brownstone façade is deteriorated, shedding large sections of projecting trim. Roofs are actively leaking and temporarily patched and tarped and wood windows are severely deteriorated. The large parish hall wing and formerly fully leased community spaces suffer from active leaks, plaster failure and weather infiltration as a result of the ongoing deterioration of the exterior envelope. The estimated cost of the restoration of the exterior and interior structures of the building is $6 million.