The St. John–Lena Border Crossing connects the towns of St. John, North Dakota and Killarney, Manitoba on the Canada–United States border. It is connected by North Dakota Highway 30 in Rolette County on the American side and Manitoba Highway 18 in the Municipality of Killarney-Turtle Mountain on the Canadian side. 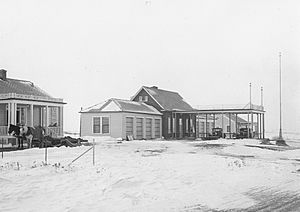 All content from Kiddle encyclopedia articles (including the article images and facts) can be freely used under Attribution-ShareAlike license, unless stated otherwise. Cite this article:
St. John–Lena Border Crossing Facts for Kids. Kiddle Encyclopedia.