St. Julien's Church on Winkle Street in Southampton was the chapel of the Hospital of St. Julien or God's House which was founded c. 1197 as an almshouse and hostel for travellers on pilgrimage to Canterbury. It was used regularly by French Protestants from the 16th century until 1939 and is thus also known as the French Church. The church is sometimes referred to as "St Julian's" but Southampton City Council's Heritage Environment Record clarifies that "St Julien's" is the correct spelling, which is also used on Ordnance Survey maps.

The building is Grade I listed, having first been listed on 14 July 1953. The building was extensively restored in 1861 and consists of a stone rubble exterior and tiled roof, with a low square tower. Inside the church is the Leper's Squint Stoup Monument commemorating those that were executed in the Southampton Plot of 1415, although the monument itself is thought to date from the 19th century. 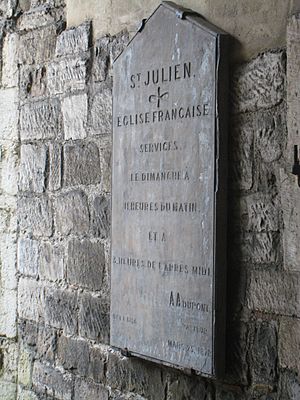 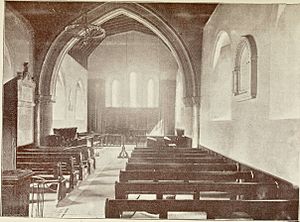 The chapel is now privately owned, with only occasional public access on open days and guided walks run by the city's official tourist guides.

All content from Kiddle encyclopedia articles (including the article images and facts) can be freely used under Attribution-ShareAlike license, unless stated otherwise. Cite this article:
St. Julien's Church, Southampton Facts for Kids. Kiddle Encyclopedia.